Are we training our horses more than necessary? 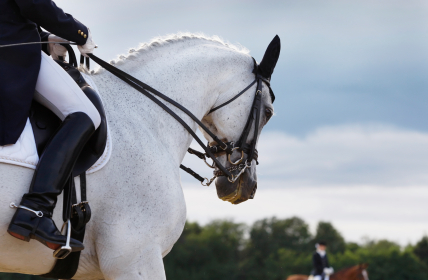 If you are repeatedly training your horse to do the same task every day, you could well be spending your time more productively. New research has found that horses have similar learning progress and remember a task just as well, when they are trained every three days, as when they are trained daily.

Horse riders and trainers may decide how often to train their horses based on a gut feeling of how they believe the horse is responding when asked to perform a specific task. To test this assumption scientifically, a team of equine scientists from Germany and Australia have been studying how well horses remember a specific learning task when trained at different time intervals.

Uta König von Borstel, head of the Animal Husbandry, Behaviour and Welfare section at the Justus-Liebig University of Giessen, Germany and her team of researchers set out to find the optimal time interval between training repetitions of a learning task and presented her findings at the 14th International Society of Equitation Science (ISES) conference in Rome.

“While training every day is not necessarily a welfare concern, it is important to remember that the type of task trained is also relevant. If the horse is taught a strenuous physical task, they will need time out between training to allow their muscles to rest and repair.” von Borstel told the conference.

The aim of the study was to assess the speed a horse learns novel tasks when trained at different time intervals using negative reinforcement and then compare the results. Negative reinforcement training, often referred to as ‘pressure-release’, involves the removal of pressure in order to increase the likelihood of a horse repeating the desired behaviour.

“Overtraining is a problem for horses both mentally and physically. When horses are over-trained they start to show a range of mental issues including switching off, response lowering, aggression etc. They may also show physical ailments such as bone, tendon and muscle issues. So, the more we can actually reduce these stressors, the better.” said Andrew McLean.

While there is some scientific information available on the use of negative reinforcement training, little objective data currently exists regarding the optimal time interval between training sessions.

“We plan to research how learning is affected if we train different tasks in between training sessions.” von Borstel said.

The researchers trained 39 horses ranging in age from 2-24 years to perform three different, unfamiliar tasks. One group of 20 horses was trained once daily and the second group of 19 were trained once every third day. The horses were trained to lower the head on poll pressure (HL), back up from neck pressure (BU), and to step forward upon pressure at the fetlock (SF) using negative reinforcement.

Training sessions lasted 1 min, allowing for 3-5 repetitions per task and session. Training success was scored using a 6-point scale, with 0 being no response, 1 being moving slightly (less than 1cm) using strong pressure and 6 being the horse moving well using light pressure. The horses’ heart rate, behaviour and the time and pressure they needed to respond were also recorded.

In all cases, the horses’ performance improved significantly during both training schedules. The researchers found that after two weeks the horses trained daily performed slightly better than those trained every third day. However, when comparing their performance at the end of week one and at the end of the 28-day study period, the horses showed no significant difference in the time or pressure required to respond for any of the tasks, or in their learning progress.

Similarly, when comparing the learning progress of both groups after the same number of training sessions, there were no significant differences in performance.

The results of the study suggest that horses do not forget what they have learned if they are trained every third day rather than daily. Allowing horses a break of two days between training sessions rather than training them daily not only results in similar learning progress, but is a more efficient use of the trainers’ and the horses’ time.

“The key is we are trying to turn action into habit. During the acquisition phase (the training phase) things can go wrong, so the more efficiently we achieve the habit phase, the better it is for both horse and rider.” said Mclean.