The equine herald of a new age 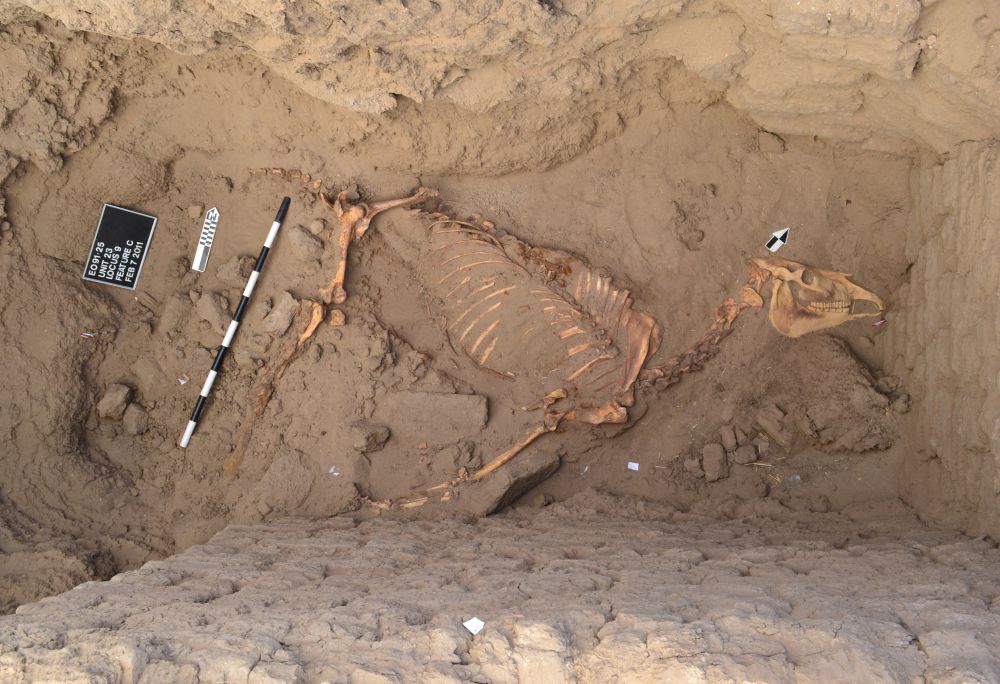 As they had for more than a decade, Stuart Tyson Smith and his colleagues were excavating a tomb in what was Upper Nubia in their years-long UC Santa Barbara-Purdue University mission to understand the history of an ancient village on the fringes of Egyptian dominance.

But rather than finding mummified human remains, they unearthed the skeleton of a horse so well-preserved it had hair on its legs. It had been covered with a burial shroud, and among the items found with it was a piece of iron that appeared to be a cheek piece from a bridle.

The horse turned out to be much more than an unexpected oddity. In their paper “Symbolic Equids and Kushite State Formation: A Horse Burial at Tombos,” in the journal Antiquity, Smith and his collaborators — lead author Sarah Schrader, horse specialist Sandra Olsen and co-director of the expedition Michele Buzon — argue that the horse represents a shift away from Egyptian governance and towards a Kushite rule in which the animal was embraced as central to the state’s identity.

“One of the interesting things about our horse is that it foreshadows the later development where these Nubian kings are really into horses,” Smith said. Indeed, when the Kushite king Piankhi put down a rebellion in northern Egypt he was said to be enraged that his horses there had been starved in his absence. “His complaint was not that they had rebelled against him, but they had mistreated his horses,” he said.

Using radiocarbon testing, the Tombos horse was dated to about 950 BC, in the Third Intermediate Period, when the Kushites of Nubia took advantage of strife in Egypt to coalesce into a political, economic and military power.

The horse was buried about 100 years after the colony began to break away in 1070 BC. The burial, Smith said, was a new development in the village at the Third Cataract of the Nile. Buried in an older tomb that had been adapted for the task, the horse was laid to rest in sacred ground.

“It’s gorgeous, and the bones are a nice, rich brown color that you don’t see in other contemporary horse burials,” Smith noted. “All the pieces are there, everything’s intact. It even had some fur left on it. As a result, because of the preservation, it’s one of the most complete skeletons, and best preserved, of any of these early horses that have been found in northeast Africa.”

The Tombos horse, which was determined to be female, was carefully lain on its side. Close inspection of the skeleton also revealed it suffered from arthritis and degeneration associated with wearing a chariot saddle harness. Curiously, Egyptian art always depicted chariot horses as stallions.

“It makes a certain amount of sense that they would emphasize stallions in the art,” Smith said, “because they’re fierce in warfare and that sort of thing. But it is interesting that in reality they were using mares as well. It’s just that the artwork emphasizes the stallion as the pre-eminent chariot horse.”

Among the more intriguing items found with the horse was the piece of iron that Smith said radiocarbon testing dates to around 950 BC. “This is a very early date for iron,” he noted. “For a long time people had thought that iron production in Nubia really didn’t ramp up until about 500 BC.”

Smith, who owns a horse, said he quickly recognized the artifact as a cheek piece for a bridle, and co-author Olson has since confirmed the assessment. “It’s rare to find iron like that in a good context,” he said, “where you can really pin the date down.

“It also counters the narrative that Nubians were backwards somehow, that anything good they got they got from Egypt,” he continued. “But they seem to have been going out and seizing what they needed. They had the latest military technology in the form of iron weaponry like we found, but also these iron trappings from the horse.”

Smith and Buzon have been excavating Tombos, just east of the Nile River in Sudan, since 2000. It was founded by the Egyptians as an administrative center in Nubia around 1450 BC. Their work there has unraveled what they term “cultural entanglement,” the process by which colonizing powers and indigenous people influence one another and change over time.

“You can see this long, entangled history of the horse weaving its way through all these different cultures until it comes to Nubia,” Smith said. “But then, horses were important in Egypt, but we have very few horse burials there. If it was a widespread practice you’d expect to see more of them.”

The Nubians, who would conquer Egypt and establish the Kushite Dynasty in 728 BC, proved to be adept at adapting Egyptian practices and technology and making them their own.

“For Nubians, they really elaborated on Egyptian materials and practices in a way that you don’t see in Egypt,” Smith said. “That’s the case with a lot of these features that Nubians were borrowing. They often take something they really like, like horses, and they make it much more elaborate, through ritualized burial, than the examples that you have in Egypt.”

Photo: The Tombos horse was discovered in 2011. The ancient horse is dated to the Third Intermediate Period, 1050-728 B.C.E., and it was found more than 5 feet underground in a tomb. The horse, with some chestnut-colored fur remaining, had been buried in a funeral position with a burial shroud. The discovery provides a window into human-animal relationships more than 3,000 years ago. UC, Santa Barbara