Track To Trail A Personal Mission For Natalie 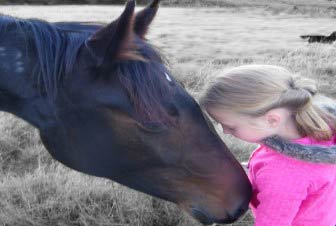 Natalie Newman is on a mission to save as many OTT horses as she can to repay the animals who saved her and her daughter’s lives.

Up until September 2009 Natalie had never owned, ridden or cared for a horse. Natalie’s journey began in September 2004 with the birth of her daughter Emily. She was born premature at 32 weeks weighing just 3 pounds & 13 ounces. Emily was a fighter and, despite the doctors telling Natalie and her husband their baby girl would be developmentally behind other children of her age, within a few short months she had not only caught up, but in most cases surpassed the usual childhood ‘milestones’. Natalie says eventually though “we started to notice little things that were not quite ‘run of the mill’ with Emily but before I could get any sense of what was going on I started to get quite sick.” Just after Emily turned two Natalie was diagnosed with very advanced ovarian and cervical cancer. By the time Emily was three and a half Natalie had recuperated enough that she could refocus on her baby girl. Things were somehow still not right. After a very stressful 12 months Emily was diagnosed with Asperger’s which is on the autism spectrum. Natalie says it was “evidently a condition she had ‘inherited’ from me ... Asperger’s wasn’t really out there when I was a kid! Kids like me were just a little odd!” she explains with a grin. Six months went by and none of the specialist’s treatment methods seemed to have any effect on Emily. (“except for on our bank balance!”). “But then I saw a news story that forever changed our lives. It was the story of an autistic boy and his father’s horse...” Three days later she was at Scenic Hills Riding Ranch leading Emily on a horse. It was magic! Within two months the Newman’s had sold their house in Sydney and bought a 17acre property in Crookwell. {sidebar id=3}Seven months later the family own four beautiful horses – “all rescued from the meat truck!” - who have changed Natalie and Emily’s lives (and husband Rick’s as a result) in a way that can only be “attributed to the loving hand of God”. The family now have a Shetland named Jasper, an Arab x Quarter Horse named Blue Jeans, a Stock Horse named Shadow and, their latest addition. a four year old Standardbred straight from Bankstown Trots named Sally. Natalie taught herself to ride and then guided Emily. “One day she said to me, ‘Mummy, now I know what it feels like to be calm...’ The horses make her whole… Me too... When you haven’t fit in anywhere in your whole life, it is the greatest gift to be so welcomed and accepted into a family of horses...” Natalie says. “They have taught us so much and helped us both be less ‘Aspie’ in social situations,” she continues. “Now it is my time to give back to them!” The family have launched Track to Trail which was born from a dream to give ex race and harness horses a brighter future, join good families with good horses and to have a facility where children and adults on the autism spectrum can enjoy the amazing therapeutic benefits that horses offer. “As soon as I realised what was happening to failed and retired track horses I knew what I had to do,” Natalie says. “It’s going to be a long, and sometimes difficult, road but I know that it will be worth it! They are worth it!” Visit Track To Trail for more info.