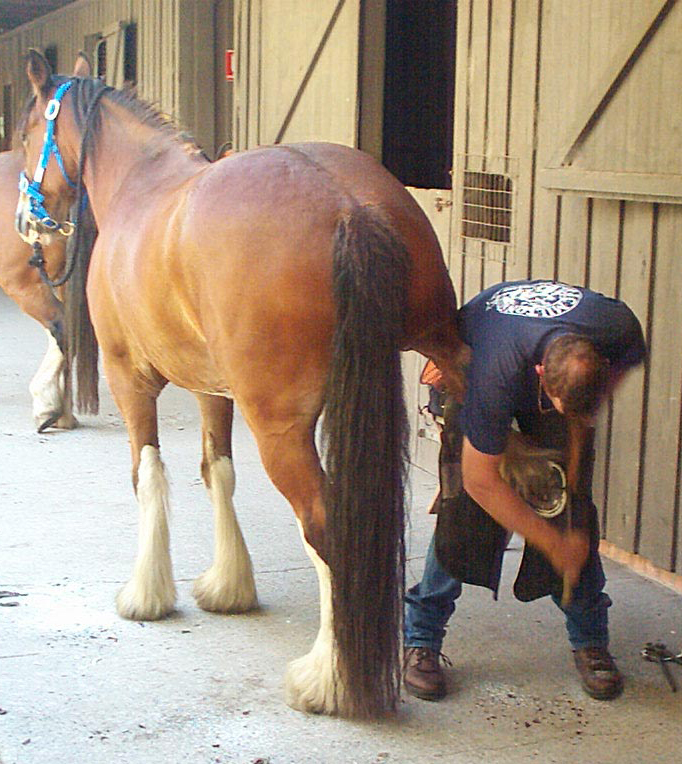 It is that time of year, when constant wet ground and mud seems to lead to a spate of hoof abscesses.

If you have never had experience with hoof abscess it can be quite a frightening thing. Depending on the severity some horses will overnight go completely ten out of ten lame. The leg may swell up and there may be considerable heat in the hoof/lower leg. Well the good news is that if recognised and treated early it is rarely a serious problem!!! What Is A Hoof Abscess?
A hoof abscess is an infection within the hoof in an area called the lamina. The lamina consists of hard and soft sections, designated the insensitive and sensitive lamina, respectively. The hard lamina is essentially the hoof capsule, and the soft lamina is the tissue that connects the hoof capsule to the bone, also known as the white line. On the bottom of the hoof, called the solar surface, the sole of the hoof connects to the hoof wall at the white line. Recognising Hoof Abscess:
Most often the signs of an abscess are dramatic and sudden. Sometimes a horse can start out moderately lame and become very lame fast. For someone who has never seen it before, a horse with an abscessed hoof can be in so much pain that it can look like he has a broken leg. Abscesses have some classic symptoms. Hoof tester sensitivity or pain in the area of the abscess, increased digital pulse to the hoof, decreased ground contact of the heels, swelling of the lower leg, pain to percussion (tapping the hoof with a percussion hammer) and an erupted tract of pus are hallmark symptoms. Any combination of these symptoms is enough to make a tentative diagnosis of an abscess. Causes Of Hoof Abscess:
There are many causes of abscess in horses. In my experience the most common, in no particular order are; 1. Bruises- Bruises can turn into abscesses. Bruises occur when the hoof suffers some sort of concussion either from an opposing hoof or object (rock, et cetera) hitting the hoof wall, or by stepping on something, usually stones. A bruise is basically a pocket of blood that develops when some blood vessels are broken. This pocket of blood is a wonderful growing environment for bacteria. As the hoof grows out, the bruise grows out, allowing bacteria to invade the area and develop into an abscess. 2. Seedy toe- Anything that compromises the integrity of the hoof wall- seedy toe, cracks, bad flares etc can allow the invasion of abscess causing bacteria into the sensitive structures of the hoof. As they grow the bacteria eat away at the sole and start travelling, usually dissecting under the sole and along the white line, travelling upward toward the coronary band. As the abscess gets deeper and bigger it becomes more painful, sometimes causing the leg to swell as it gets close to the coronary band. {sidebar id=3}3. Foreign objects- Penetrating foreign objects may also cause abscesses. A farrier’s nail hole may become infected and develop into an abscess. More commonly, though, the horse steps on a foreign object, usually a nail, and it drives into the sole, taking dirt and bacteria in with it. When the foreign object is pulled out the sole closes up, sealing itself and the bacteria in the hoof. If the area is not opened up immediately to clean out the bacteria and other debris, an abscess can form. Treatment:
If you think your horse is suffering from an abscess call your vet or farrier immediately. He or she are best qualified to treat the infection. To make their job easier and help provide some relief to the animal poulticing the affected foot is always a good idea. Depending on the stage and the severity of the infection the horse will usually be back to normal within 2 to 5 days. Prevention:
As the saying goes "an ounce of prevention is better than a pound of cure". Regular and correct trimming of the hoof will go a long way to preventing abscesses. Correct trimming will help balance the foot thus evening out the stresses placed on the hoof wall. It will centre on promoting a strong, solid sole-wall junction (white line) that resists penetration by debris. Hoof abscesses are less likely to occur when a solid sole-wall junction (white line) is maintained. Regular cleaning out of your horses feet before and after work, hygienic stabling and where possible access to dry ground will all promote a healthy foot and more fun time for you and your horse!!! Visit Shane Ellis Master Farrier for more information.