A Bit About Bits. Is The Snaffle The Most Dangerous Bit Of All? 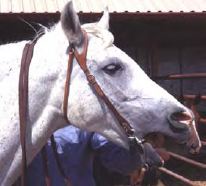 In online discussions about bits, many posters will say that in the wrong hands a snaffle can be as deadly as any curb, gag or combo bit. At first glance this seems logical, after all the majority of bits are made of metal and sit on the soft and sensitive tissues inside the horse's mouth. Any application of strong or rapid pressure on those soft tissues will cause equal harm? The problem with this claim is that it doesn't stand up on closer scrutiny.