Horses That Freak Out 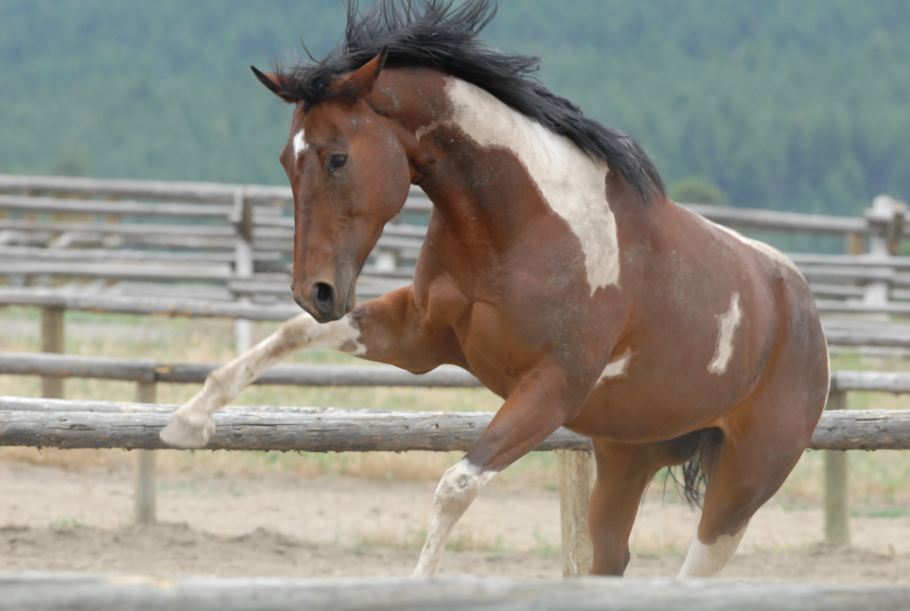 You’ve seen them, maybe you own one. They are uncontrollable, not all the time but often enough to cause you concern ... They’re skittish, can’t stand still, hard to lead, barging and shouldering, leaping in the air, rearing, kicking out. They act like you don’t even exist. And if you ever got up enough nerve to ride it turns out almost suicidal. Fighting the bridle, leaping, plunging, trying to run off, and rearing when you hold them back. But you hold them back for all you’re worth because you know if they get the jump on you, they’re off at full speed, blind with crazy and you’re on top pulling on the reins with all your might ... and it’s as though they can’t feel a thing. It’s terrifying. I’ve been there.

This may seem very extreme to those of you who’ve never had this experience. Those who have experience this know exactly what I’m talking about. I thought I was pretty confident with horses ... until I met this horse. That was when I knew I didn’t know enough, but I didn’t find anyone who could help me make a real change with the horse until I met Pat Parelli. And even then, I really didn’t realize how much of the horse problem was me. Why Horses Go Crazy Around People
Most of these horses are just fine when with other horses ... but the moment the human comes into the picture is when the “crazy” side comes out. These horses aren’t crazy and they don’t have a mental condition. They are just terrified of people and can’t tolerate any mistakes or attitudes of force. These horses take a lot of understanding. Even though we think we have a domestic horse, inside every horse (even a gentle horse) is the wild primal horse. Over millions of years horses have adapted to their environment yet kept their instincts. Horses are still herd animals, perceptive to danger and changes. After 6,000 years of riding and genetic development in breeding horses, we have managed to develop some strains that are less sensitive (drafts) and some that are super sensitive (Arabians, Thoroughbreds) and everything in between. Mostly, it’s those that are more toward the hot blood that people have trouble with. (The equine at the other end of the spectrum: the smart, less sensitive guy who’s more inclined to be lazy such as Mules and Warmbloods ... that’s another article!) The more sensitive and highly-strung the horse, the more difficult they are for people who don’t know enough. Take me for example ... I thought I could handle “spirited” horses! It took an ex-racehorse that really scared me on several occasions to make me realize that I was not as confident as I thought and that I didn’t have what it took to deal with it. It never occurred to me that this could change. I thought that high-spirited horses would always be hard to control. Why Are You Part Of The Problem?
Because you are not part of the solution. If your horse keeps acting like this around you, it’s because you are not actively and soon-ly solving it! Ouch. It’s much easier to blame the horse! “He’s screwy. She’s a nutcase. She has hormonal problems. He was abused.” It doesn’t matter how the horse got like this, it’s just a hypersensitive horse. They cannot be expected to behave quietly and perfectly no matter what you do, no matter how clumsy, insensitive or uneducated/unsavvy you are. Once I accepted that I was part of the problem, that’s when things changed. Horses are capable of making phenomenal changes in a very short time. If only people could do that! We people tend to never want to change, or we wait until we’ve had so many bad experiences, almost died or got frustrated and devastated beyond belief. Even then, some of us stick to what we’ve always done! It took a horse like my Thoroughbred, Regalo, to make me look beyond the English riding world, and go to Pat Parelli for advice. But I had my back to the wall. The only way out was to sell the horse (to a man, or to the dog food people). Feel Like Giving Up?
Oh yeah ... often because frustration and failure surfaces a little too often for comfort. BUT I DIDN’T. Because I believed that it would work out in the end and I was prepared to do what it took. That’s the difference between failure and success with a horse like this. If you have a horse like this, it’s an invitation to learn more and get better QUICK! Why? Because this horse won’t give you much time to learn, he won’t tolerate your mistakes. That’s why it’s such a major decision to decide if you are willing enough to learn. If you are not prepared to go out of your way to learn at full speed about horsemanship, if you don’t think you’ll be able to get through the emotional swings of elation and frustration, don’t go there. Quit now. But if you don’t quit, if you do decide to give it your all no matter what, the one thing that you’ll end up appreciating more than anything is how much your horse is willing to FORGIVE. As Pat has so often said, “Horses forgive but they never forget. Humans forget but they hardly ever forgive.” This horse is really going to teach you how to let go of your own ego and really learn the meaning of what it takes to gain “rapport.” Essentially, you stop making them wrong for being different from you. (By the way, this doesn’t only apply to horses!) I did whatever it took. But that’s me and I’m not saying it should be you. You might not be prepared to stretch yourself like I did. The important thing is you know who you are and do what is right under the circumstances. The worst thing you can do is pretend. In the end, the truth will prevail. Your horse will make sure of that!

Why Riding Is Often Worse Than On The Ground
Mostly it’s because when we are on the horse, they can feel everything. Every time we tense up, lose our balance, are late on our timing, etc ... it upsets the horse much more when he can feel all this along with his reaction.

When our feet are on the ground, loss of control doesn’t seem to feel nearly as scary. For this reason it’s easier to get along with these horses on the ground, and the better the relationship gets the less reactive they are when you start riding. Back To Square One!
You’re going to have high highs and low lows because every now and then, just when things were going fantastic, you’ll have a setback. While it feels like you’re back to square one, you’re not. Don’t worry. Play the Friendly Game (desensitizing) or get your horse left brain again and move on or start fresh the next day. Accept the challenge and keep learning at full speed. Don’t let yourself feel defeated, just because it got a little tough. It doesn’t mean you aren’t capable of getting past it. If you expect some difficult times it will help you manage it emotionally much better than if you think every day is going to be wine and roses! Hang in there; it’s just a temporary thing. What Does “Less Sooner” Really Mean?
Less sooner really means doing more about it sooner! Most people are too slow for the horse. By the time the horse has done something you’re in correction mode. Now you’re going to have to do ten times as much because you’re late. If you can react the moment something starts to happen, you’ll be more effective. Don’t be late, don’t be early, be right on time. You’ll get better and better at this as you progress. Basically, your horse will start to experience consequences every time it goes right brain (not punishment, but a job, a strong Yo-Yo, etc.) and find out that when he’s left brain everything is safe, comfortable and wonderful. It won’t take too long before the right brain times get shorter and shorter and they go from right to left brain more and more quickly. About Parelli
The Parelli Program, founded in 1981 by lifelong horseman and teacher Pat Parelli, combines in-depth equine psychology and common sense communication techniques into the ultimate recipe for horse and rider success. The Parelli method allows horse owners at all levels of experience to achieve success without force, partnership without dominance and harmony without coercion. Pat and wife Linda are on a mission to make the world a better place for horses and humans, working to inspire, empower and educate through natural horsemanship. Learn more at www.parelli.com or visit Carmen Smith, Licensed Parelli Professional in Australia.