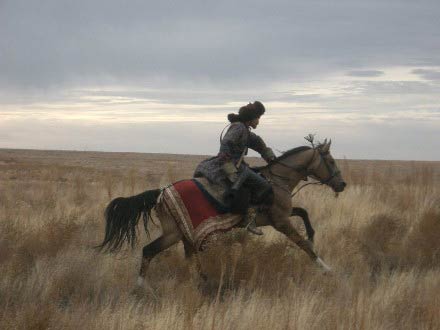 CuChullaine and Basha O’Reilly are setting off on the first continuous, around-the-world equestrian expedition. The journey will cover 12,000 miles, cross eleven countries, last two years and be the most highly developed diplomatic and scientific equestrian mission ever undertaken.

The World Ride represents the merging of the Bronze Age activity of equestrian travel with cutting-edge twenty-first century technology. This will result in a “Genghis Khan meets the Matrix” combination wherein state-of-the-art electronics will allow reader/riders to participate from afar, thereby creating humanity’s first inter-active equestrian epic. This is a journey with a difference. Even if they succeed in riding around the world, that will not be the primary goal. En route Basha will be working with scientists and horse owners to collect hair samples from every known horse breed, thus creating the first complete equine DNA chain. CuChullaine will be using GPS technology to create a unique Long Rider map of the entire route, a project designed to highlight geography to school children around the world and encourage others to undertake their own World Ride. Working with leading equine hereditary specialists, Basha O’Reilly will be collecting hair samples from the breeds encountered on the World Ride. An international appeal is also being broadcast to horse-owners world wide, so as to include their animals from continents not on the journey’s route. The goal is to construct the first uninterrupted equine DNA chain, thanks to an unprecedented international alliance of equestrian, cultural and scientific co -operation. The creation of the world’s first equine DNA chain brings staggering possibilities, including unravelling the origins of the horse. Though the horse has lived alongside mankind for millennia, many of his mysteries are still unresolved, and because of a lack of modern academic evidence, equestrian concepts often end up being argued with more passion than proof. The global equine DNA project will offer a host of new answers in fields ranging from archaeology to zoology. Current equestrian events are designed to encourage competition, commercialism, nationalism and a fear of others. Yet equestrian travel is the antithesis of any kind of ism, be it sexism, ageism, racism, chauvinism, nationalism or fanaticism. Nor can the ancient art of equestrian travel be sold like a jar of jam or reduced into a dossier of dust-covered facts. That is why the World Ride is based instead on the expression of principles, not a search for profits. It represents a collective quest to enrich our planetary equine knowledge. Lying at the heart of this new philosophy is the international Long Riders’ Guild, whose deeper meaning has always been to promote the Brotherhood of Man – both between individuals and nations. Long Riders are Mounted Messengers of Peace, open-minded and tolerant of the rich cultural traditions to be found among the world’s diverse equestrian cultures. Because they are multi-lingual, multi-cultural and have had a wide variety of experiences in a host of nations, CuChullaine and Basha will be meeting with political, scientific and equestrian leaders in every country so as to discuss the need to preserve the integrity of native equestrian cultures. Thanks to Basha’s equine DNA project, they will consider the global need for all countries that harbour an endangered equestrian breed to protect these priceless equestrian treasures. They will also encourage ‘trade not aid,’ by urging others to travel to the countries along their route and ride native horses with local tour guides. During their global journey, Basha and CuChullaine will ride to 11 classrooms, one in each country, to visit the children along the route of the World Ride. One of their aims will be to encourage global dialogue between these young horse-lovers by emphasising what they have in common. Photographs of the World Riders with each class of children will be posted on the website, together with information about that country’s traditions, culture and history, thereby making geography an exciting and fun subject for this new generation of Little Long Riders. Basha and CuChullaine are working to formulate a special Internet-based educational programme which will link the classrooms chosen to participate in this historic equestrian event. Children will thus be encouraged to, “Read the books, get in the saddle, and explore the World.” Yet even if you can’t get in the saddle, you can at least get on the Net. {sidebar id=3}Ultimately, the World Ride is designed to link humans and horses via the saddle and the internet, with the goal being to demonstrate that all humans share a common mother-tongue, “horse.” This is a journey about courage, not records, and you are invited to explore this website, to follow the World Riders and participate in this unprecedented equestrian event. Basha and CuChullaine’s progress can be followed on the World Ride site. They are also seeking DNA contributions from horse breeds all over the world. Details are on the site. Basha and CuChullaine O’Reilly are the founders of The Long Rider’s Guild, the world’s first international association of equestrian explorers. With members in 39 countries, the Guild has supported more than a hundred equestrian expeditions on every continent except Antarctica.