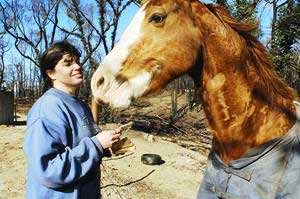 NATALIE Laurie and husband Tony lost everything when the Black Saturday fires made not one, but two, attacks on their Doctors Creek Road property.

While the house, the sheds, the fences can be replaced, Mrs Laurie lost two great loves of her life when her horses - “my boys, Bandit and Smokey” - perished in the fires. “On the day of the fires, I’d already taken the summer rugs off the boys earlier in the day and I released them, hoping that they’d have a chance to get away but it just came too quickly, so quick,” Mrs Laurie said. Smokey and Bandit have been laid to rest in a rose garden on the family property and while she is still struggling with their loss, a new addition to the family – an RSPCA rescue horse called Apache – is putting a smile back on her face. “I’m not replacing my horses, it really upsets me when they say I’m replacing my horses because I could never, ever replace them,” Mrs Laurie said. “Apache is a new horse, an addition to the family.” After prompting from her husband and friends she contacted the RSPCA about the possibility of adopting an animal in need. While initially wary about having another horse, she said she believed fate had brought Apache, an 11-year-old paint, to her. “It took me three or four months before I could even go near the place where we buy our stock feed,” Mrs Laurie said. “But I rang and I got put through to (RSCPA inspector Maree Crabtree). She has been just brilliant through all of this and she said that he’d just come in to them not long before,” Mrs Laurie said. “When she said he was a paint horse, well that was actually a breed that if I could buy a horse, that is the breed I’d buy. “She sent some photos, he was very skinny, had a very dry, rough coat and had the typical look of a horse that had been just left to his own devices. “I just saw him and thought this was meant to be, we were meant to find each other.” Apache, while a little dishevelled when he first arrived at his new home, is becoming a handsome fellow under Mrs Laurie’s watchful eye. With some serious spoiling by the Lauries and their neighbours’ children, he is enjoying his status as the new “man about the house”. “He’s an absolute character,” Mrs Laurie said. “He was a stallion when the RSPCA got him in so they gelded him, but he still thinks he’s a stallion – he shows off in the paddock. “He just needs someone to love him and teach him his manners again.” But for all his showing off and grandstanding, Apache still sometimes looks for a comforting cuddle from his new mistress. “He’s so funny, he’s not really sure about the kangaroos out here yet,” Mrs Laurie said. “I’ve never seen anything so funny than this great big horse standing behind a woman with his head in her back, trying to hide from a kangaroo.” Ms Crabtree said Apache had been voluntarily surrendered to the organisation by his owner, who was unable to give the care the horse required. {sidebar id=3}“I think everything happens for a reason and these two were just meant to be,” Ms Crabtree said. “Apache is just such a lovely horse and I'm so grateful that we found Natalie. “The RSPCA feels really good about this – we’ve just made someone really happy who has gone through hell and we know Apache is going to have the best life with this family.” Story courtesy of the Star News Group. Photo by EMILY LANE