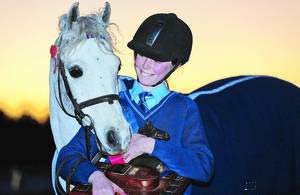 Australia’s most promising young equestrian competitors will be on show at a national three -day event in Werribee, starting Tuesday September 29.

The Horseland Equestrian Australian Interschools Championship will showcase more than 400 school students, from Prep to Year 12, who have excelled at state level and will compete for national honours at Werribee Park National Equestrian Centre. Participants qualified for the event by finishing in the top four of their respective class divisions and age groups in showjumping, dressage, eventing, showman and combined training events. The nationwide combined schools event is in its third year, having launched in Warwick, Queensland, in 2007. It aims to provide a pathway for young riders starting at club level and aspiring to compete nationally and internationally. Equestrian Victoria’s Kellet McDonell said the event provided riders with much-needed large -scale event experience. “It is the grass roots of Australia’s equestrian international success,” she said. “Most of the disciplines are Olympic sports and many of these young riders aspire to be future Olympians.” {sidebar id=3}Spectators can enjoy the action at Werribee Park for free, with 25 events over the three days. For more information call Equestrian Victoria on 9013 0707.