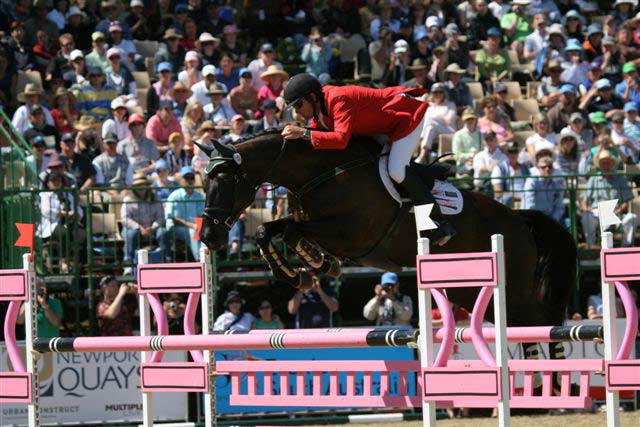 Planning for Adelaide's world-class equestrian event, the 2009 Australian International 3 Day Event, is gathering speed with organisation now well underway for another successful - and expanded - event to be held in Adelaide’s Parklands from November 13 to 15.

Olympic Gold medallist Stuart Tinney, Olympic Silver medallist Shane Rose and World Cup Pacific League dressage champion Heath Ryan, all from New South Wales, have confirmed they will take part along with Olympic medallists Megan Jones and Wendy Schaeffer, both from South Australia and Sonja Johnson from Western Australia. Australian team representatives Amanda Howell, Olivia Bunn and Georgia Clifford from Victoria are also expected to compete along with World Cup final contender Kevin Mc Nab from Queensland. Event Director Gillian Rolton said the Australian International 3 Day Event was the most significant horse sport event in the Southern Hemisphere and she was thrilled that the nation’s best riders would once again be showcasing their skills. “Tickets are now on sale, with this year set to be bigger and better than ever with an expanded range of events, as well as a strong field of competitors from Australia and New Zealand in the Olympic level four star class,” said Ms Rolton. “In 2009, spectators will have the added bonus of witnessing some of the Southern Hemisphere’s best equestrian athletes as the 2009 Australian International 3 Day Event plays host to New Zealand’s finest horse and rider combinations competing against the Aussies for the hotly contested Trans Tasman Championship.” Mr Tinney said he looked forward to the Australian International 3 Day Event and enjoyed competing in Adelaide which provided an exciting atmosphere due to the event’s city parkland location. “People travel from all over Australia and overseas to come to this event to support the riders and their horses, and enjoy the spectacle of dressage, cross country and show jumping in a unique city location,” he said. “The pace is fast and furious and people can see some of the biggest names of the equestrian world in action.” With the Saturday of the event coinciding with the running of Adelaide’s much loved Credit Union Christmas Pageant on November 14, organisers are theming the day as a “family day” encouraging families to enjoy the fabulous sights and sounds of the Pageant and then spend the afternoon relaxing in the parklands. {sidebar id=3}For the kids, there'll be plenty to see and do, including pony rides, a dedicated playground area, arts and crafts and children’s entertainment. While for the mums and dads, the expanded Trade and Lifestyle Village and the Food and Wine Fair - featuring some of South Australia's finest wineries – should appeal to every appetite. “Rymill Park will again be the vibrant ‘heart of the event’ and we're really working hard to make sure that it offers even more attractions for horse lovers and the general public alike,” said Ms Rolton. “Tickets are now on sale through Venuetix and we'd love you to come along to be part of all the excitement and fun!”