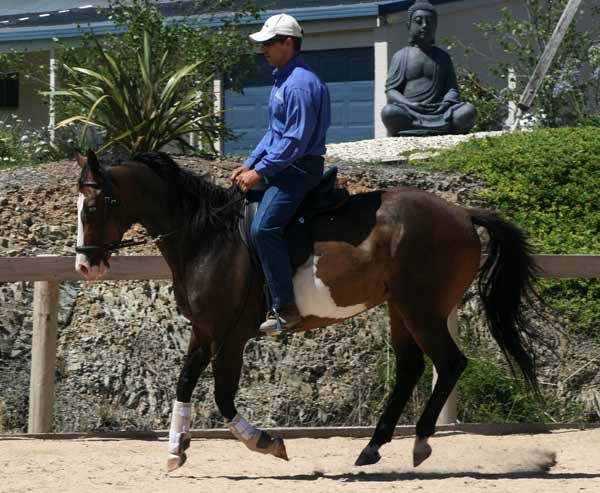 Renowned South American Horseman, now based in Australia, Carlos Tabernaberri will be demonstrating his own quiet brand of horsemanship at the National Equine Expo Bendigo in November.

Carlos Tabernaberri grew up in Gaucho (cowboy) country, where people learn to ride by being put on a horse and working it out themselves. Argentinean horsemanship is based on the Vaquero way, which is a combination of the foundations of classical Spanish horsemanship and cow work or Rancho (ranch) horsemanship. Horses are broken in using a very proud and traditional, but cruel, approach called Doma Nacional (national breaking in). That is why Carlos became passionate about developing horses by establishing a good foundation through understanding, not through the force of a bit. Carlos calls his approach Doma Racional. (rational starting). As a result, Carlos not only worked out how to ride and develop a feel for the horse, but he also spent untold hours watching them to understand them better. As he says, “if things weren’t working right for me with a horse, it meant I needed to pay more attention to him and what he was trying to tell me.” Already known in the US to those who have seen him on RFD-TV or attended his clinics, Carlos prefers to let the horses speak for him. But to give you a better idea of Carlos and his approach: "I truly believe there is no such thing as ‘natural’ horsemanship. What I do believe is that there is good horsemanship. After all, nothing we do with a horse is really natural – we’re predators and they’re prey animals. We continually take from our horses, but rarely give back. Even the simple act of riding puts the horse in a situation where he has little, if any, say. "You need to give to your horse before you can ask for something back, and that starts with you. How you think, act, and question. How you work with your horse on the ground. Giving to your horse starts when you’re willing to ask yourself a few questions: Am I tentative? Impatient? Aggressive? Stressed? Fearful? "These ordinary behaviours can cause extraordinary difficulties with your horse. And if your horse sees you as the cause of his difficulties, he will give you very little in return. When that happens, it’s often easiest to say ‘my horse doesn’t have what it takes’. What’s more likely is that your horse has had it all along and you just missed him trying for you. If you’re to build his confidence in you – and in himself – you need to recognise and reward him each time he tries for you. You will see that he will reflect the effort you put in and you’ll share a common goal. "Having success with horses doesn’t depend on how long you’ve been around them. Horses don’t read résumés. To have success, you need to look for approaches to working with your horse that make sense to both of you. Do not simply follow tradition or what someone else has told you is best. You will know what works for both you and your horse." Carlos Tabernaberri will be demonstrating his horsemanship skills in The Indoor Demo Arena at the National Equine Expo Bendigo at 1pm on both Saturday and Sunday 21 and 22 November. {sidebar id=3}