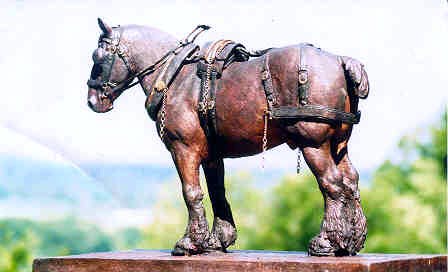 After a decade of campaigning and fundraising the Shire Horse and Carters who worked with the animals will finally be honoured with a 2.4 metre tall bronze sculpture.

The hard-working Shire Horses and their handlers carried vital supplies from the docks to local warehouses and shops during the heyday of Liverpool’s port, in the industrial north of the UK. They have a 250 year tradition and played a vital role in transporting goods, including supplies for the Normanby D-Day landing, during World War Two when petrol rationing limited the use of motor vehicles. Since 1997 surviving Carters from the Carter’s Association have worked tirelessly to raise the £120,000 needed to create a monument to the working horses. {sidebar id=3}They have now achieved their goal and the sculpture, created by renowned artist Judy Boyt, will be unveiled on May 1st, the traditional day for the May Day Horse Parade. Called “Waiting” the sculpture will be situated near the Liverpool Museum at Albert Dock. Read the full story in the Liverpool Echo. Photo: Model of “Waiting” from Liverpool Carters Working Horse Monument Project.