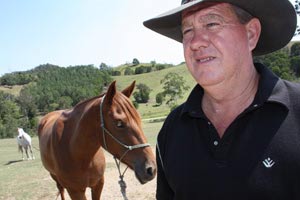 A Laceys Creek man whose horse was stuck dead by lightning in November has warned animal owners of the potentially fatal nature of savage storms.

Soon after returning from a weekend ride away, Kevin McKenzie’s 10-year-old horse Sonny died during a thunderstorm that hit the region on 29 November. Mr McKenzie said the horse, which was valued at around $5000 and one of six equines he owns, was killed instantly when the lightning struck a tree just 20m from his home. “They (the horses) run free together in a paddock here and there’s a hoop pine and a Norfolk pine, really big, tall trees, and every time there’s any sprinkle of rain they always run under them,” he said. “Of course they ran under them but not only was there rain, there was a lightning strike that hit the top of the tree. “It killed one (horse) instantly and put another one down for about half an hour. “I had heard of different stud horses being killed by lightning on different properties, and people have had cattle killed if they’re beneath trees. “They could probably stand under there (the tree) another hundred times and it never would happen again. It’s just the luck of the draw I suppose. It’s still a bit hard to believe he (Sonny) is not here.” Mr McKenzie said his family, including three children, were still shocked by the incident. {sidebar id=3}“They were all here that day so it was a bit horrendous for a while, that’s for sure,” he said. “They wanted to run outside to help … but we had to wait half an hour or more, long enough for it (the storm) to pass before we went out. “By that time the horse had got up, and we already knew the verdict on the other one. There was not a lot else we could do. “It just goes to show when there’s a storm you really shouldn’t be out in it at all because there’s every chance you yourself could get hit.” On average between five and ten Australians are killed by lightning each year. The odds of a person dying from a lightning strike are about one in 1.6 million.