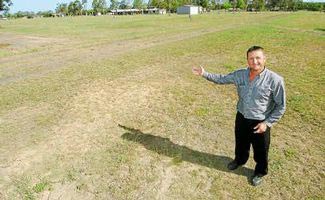 Megan Wray is not horsing around with plans to bring a multimillion-dollar equestrian centre to Bundaberg.

With the support of many Bundaberg region residents, she has submitted a concept plan to the council that could see a 70m x 80m covered area built at the Agro-Trend grounds. The facility would be used as a Riding for the Disabled venue, attract equestrian events to the region and become the new home for the Bundaberg Horse and Pony Club, which will lose its current site in July to make way for an extended car park at Bundaberg Hospital. “It’s not something we are hoping to do — it is something that we are going to do,” Mrs Wray said. “As soon as we get approval from the council, I will start writing up funding applications.” Mrs Wray said the proposal was to do the work in stages, with the first part having the area levelled, fenced, road base laid and sand crumb filled. The long-term plan is to have the entire area covered with lights for evening and night riding. Mrs Wray said the lack of facilities in Bundaberg meant the Equestrian State Championships had been held in Maryborough on several occasions instead. “We have lost the event to Maryborough twice now,” she said. “That is 1000 people each day for five days that don’t come to Bundaberg. That is a lot of lost money.” While the arena would primarily be used for equine events, it could be put to many other uses such as a pavilion, cattle arena or rodeo grounds. Bundaberg Horse and Pony Club president Allan Emery said the centre could allow Bundaberg to be more of an equine hub. {sidebar id=3}“I think it could bring in lots of money,” he said. “If we had better facilities, we could hold a lot more events in Bundaberg.” Cr Lynne Forgan said while the centre was on the drawing board, nothing had been approved as yet. “It is something that we will discuss,” she said. “We will be looking at the opportunities available.” Mrs Wray said she was impressed with the council’s support so far. “We have had a meeting to discuss the proposal and the councillors are so supportive,” she said. “They have a huge area to deal with, but if we work as a team, this could be a really great thing for the region.” Source: NewsMail