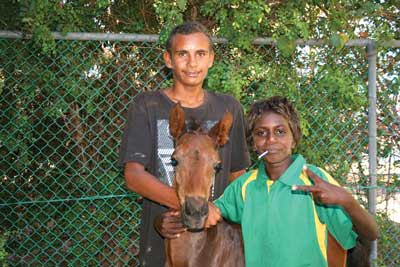 Just before Christmas last year, three local Pilbara boys were on their way to enjoy a spot of fishing out near 5 mile when they came across a young foal that looked lost, thirsty and in desperate need of help.

The young horse was all alone in the 40 - 46 degree heat, without any water in sight. Waylon, Aiden and their friend Levey were very concerned for the young foal as it started to follow them. The boys decided to head back home. There, they picked up a trailer and returned to the young foal. “We helped him onto the back of the trailer,” they explained. “We had to secure him down, for the drive back to 5 mile community.” The boys took the horse to their Aunt Ellery’s place. There the boys provided the foal with much needed water and nourishment. They affectionately named the young horse Raindrop and spent much of the next week over Christmas looking after the young foal. The help and compassion they provided Raindrop along with their Aunt Ellery’s care for the horse kept him alive and provided him with a second chance. A young foal cannot survive without a mother or access to water, the horse may have possibly died alone in the Pilbara heat if they had not rescued him. The boys Aunt was later speaking to another local Bernie Madison. She explaining the events which lead to the horse being in her care. {sidebar id=3}Ellery also expressed some concern that she may not have enough room to keep him on her property. Bernie and his wife Joan offered their help to Ellery and agreed to come and pick up the horse who they said could stay at their larger property. The foal took to its new home just as well as its first, enjoying the care and compassion of its rescuers as they nourished and looked after the horse. The horse grew stronger over the next three weeks, the boys visited and everyone cared for him as best they knew how. Unfortunately the young foal developed an eye infection and required a visit from the staff at Karratha Veterinary Hospital. A local vet travelled out to treat the young foal. The locals who had been caring for the young foal discussed the future of the horse with the vet, and it was decided that the best step forward would be for the horse to return to the veterinary centre as the young boys Waylon, Aiden, Levey and Bernie and Joan would all have to return to full time work and school and could not continue to care for the horse during the day. The horse is now in the care of the Karratha Veterinary staff. It is estimated the young horse is 7 - 8 weeks old. Once he is ready, the horse will be adopted by a local horse enthusiast and will hopefully join other horses at a local stable. The boys travelled into town last week with Bernie to visit Raindrop. They were happy to be reunited with their friend even if it was only for a short time.