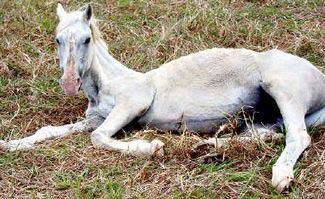 A Queensland horse owner has been fined $4000 for the neglect of his horse.

The aged grey horse was in such a bad state that it was euthanised by RSPCA vets, who deemed the horse would have been in constant pain and it would have been cruel to allow the horse to continue living, shortly after being seized. The horse was suffering from skin cancers, melanomas, a broken tooth, was underweight and had a leg bone protruding through the sole of one hoof. Despite visiting the horse every day to feed it, Magistrate Ross Risson said Danny Kearns, who owned the animal, had breached his duty of care to the horse under the Animal Care and Protection Act. Kearns had told the RSPCA officer who attended the report of the distressed animal that he had noticed it was lame ten years earlier. {sidebar id=3}Magistrate Ross Risson accepted that Kearns visited the horse daily and kept it fed and watered but noted “because you were in regular contact with the horse you should have been aware of the problems that the horse was having.” Risson convicted Kearns and fined him $4000 plus $73.80 in court costs. Read the full story on The Daily Mercury