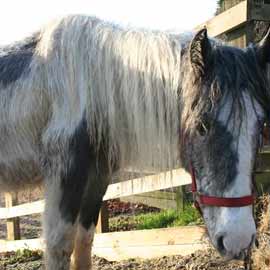 Horse trader James Gray has been jailed for a further 8 weeks after appearing at Aylesbury Crown Court this morning. He begins his eight month prison sentence immediately (Warning: Contains video and images that some may find distressing).

Gray was arrested yesterday by police in Worcestershire after absconding from court on Wednesday 12th May. Gray and his wife Julie (42), daughters Jodie (27) and Cordelia Gray (21) and son James Gray Junior (17) were appealing against sentences handed down to them in June last year for cruelty to more than 100 horses, ponies and donkeys in a case brought by the RSPCA. All sentences were upheld with James Gray receiving a 26 week prison sentence and a life ban from owning and keeping horses. The rest of the family have been banned from owning and keeping horses for 10 years.

Recorder of Aylesbury His Honour Christopher Tyrer described the case as ‘cruelty on a scale that beggars belief' and today told Gray that his absconding had been 'a final act of betrayal of yourself by yourself'. It was a case that made national headlines. 31 horses, ponies and donkeys were found dead and over 100 were removed from Spindles Farm in Amersham in January 2008. Leading international horse charity World Horse Welfare took eleven horses from Spindles Farm into its care, all of which were suffering serious problems. They included Blakey, an emaciated and lice-ridden Thoroughbred and Polly, an aged bay mare with horrendously overgrown and cracked feet. Thankfully all the horses have now fully recovered. Chief Executive Roly Owers comments: "World Horse Welfare is very pleased that James Gray has been arrested and given an extra 8 week sentence. This was a simply horrific case, the worst in UK legal history, in which over thirty horses died. Thank heavens that after two long years, justice has finally been done. {sidebar id=3}"Like all of the charities involved, the cost to care for the horses over the last two years has been enormous. We look forward to being able to find them loving new loan homes where they can look forward to a happy life far removed from the one they experienced in the hands of the Gray family." World Horse Welfare Field Officer Nick White was one of the first at the scene back in January 2008. The memories from that day will remain with him forever. "After seeing the conditions in the fields, it wasn't until I went into the yard that the enormity of it hit me," he says. "There were dead horses on the ground in front of me, and to the right. I looked across there was a dead horse in the stalls. It was like walking into another world. "There were none of the normal noises I associate with a stable yard - horses moving about, eating, drinking, calling out to one another or the gentle noises that horses make when approached, expecting to be fed or cared for. They were totally silent. Even the horses that appeared in better bodily condition seemed to be depressed, almost as if they had lost their dignity."  Source: World Horse Welfare A slideshow of the Spindles Farm Horses – then and now. By Carol Phillips