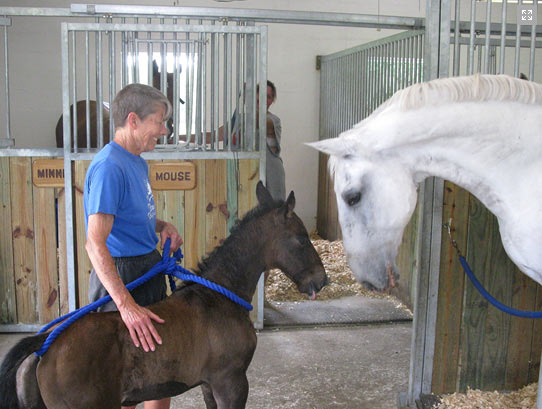 COLLEGE STATION, TX – Researchers at Texas A&M University College of Veterinary Medicine & Biomedical Sciences have achieved another cloning first with the successful delivery of a foal using oocytes from a live mare, the first such clone in the world.

The delivery of the foal highlights Texas A&M’s long tradition of leading science in equine reproduction, and has been a great experience for the owner of the new foal. “I’ve always liked having three horses to ride,” said Kit Knotts, proud owner of Mouse, the foal that represents the successful cloning efforts and the latest in equine reproduction science at Texas A&M University College of Veterinary Medicine & Biomedical Sciences. “I called and emailed breeders to spread the word that I was looking. Everything I could turn up was either too small, too young, too old, not quite sound, etc. I realized I didn’t want just another horse to have another body in the barn, I wanted another Marc.” Knotts’ efforts to find a horse that had the same qualities as her prized Lippizan stallion, Marc, (Pluto III Marcella) would lead her to Texas A&M University and equine reproduction expert, Dr. Katrin Hinrichs. “My local veterinarian, Dr. Brad Newman, mentioned that Texas A&M was cloning, but it was when Dr. Adam Eichelberger joined Newman Equine that we began to pursue the possibilities.” Dr. Hinrichs’ lab is noted for achieving the first cloned foal in North America, and the third in the world with Paris Texas, who arrived in 2005. The lab has since produced twelve cloned foals. Currently there are only three labs in the world that have reported the successful birth of cloned horses – Texas A&M University, Viagen (a commercial venture based in Texas), and the lab of Dr. Cesare Galli, in Italy. “We have worked on this clone for about two years,” said Hinrichs, a professor in the Department of Veterinary Physiology & Pharmacology. “This is actually our first foal produced using oocytes, or egg cells, from live mares. We recovered the oocytes from our herd of research mares using the same method used to recover eggs from women for in vitro fertilization. We used the oocytes for the cloning process, which made it difficult as we had very few to work with at any one time. During the cloning process, we tested a new technique that has been reported in mice to decrease birthing problems. Mrs. Knotts has been very supportive of our efforts to clone her horse, and has even named the foal ‘Mouse’ in honor of the research that produced him.” The process began with a biopsy of skin cells from Marc, the horse to be cloned. Through the cloning process using oocytes recovered from a live mare, viable embryos were developed and sent to Hartman Equine Reproduction Center, an embryo transfer facility in North Texas which works closely with Hinrichs’ lab, for transfer into surrogate mares. Minnie, the mare carrying Mouse, stayed in North Texas for approximately 200 days, then was sent to her new home in Florida. Minnie began to show signs of an early delivery, and was taken to the University of Florida College of Veterinary Medicine for observation and intervention. That’s where Mouse arrived and was cared for by a team of neonatal experts that helped make sure he would make it through this critical time. {sidebar id=3}“Having Minnie with us for several months prior to foaling has been great,” added Knotts. “The teamwork between Dr. Hinrichs and her colleagues at the University of Florida has been outstanding, frankly saving Mouse’s life more than once before and after birth. Hinrichs noted that while Mouse is truly an identical twin to the original horse, Marc, that there will be differences as the foal grows due to environmental influences. “I have become really interested in the science involved,” notes Knotts. “Dr. Hinrichs has been wonderful about keeping me up on what is going on in the lab and feeds my interest by explaining things in terms I can largely understand. I am very proud of the contributions our project has made to the body of knowledge about cloning, which benefits far more areas of equine reproduction than most realize.” Photo of Mouse and Marc by Ben Knotts; photo of Mouse by Kit Knotts Source: Texas A&M University