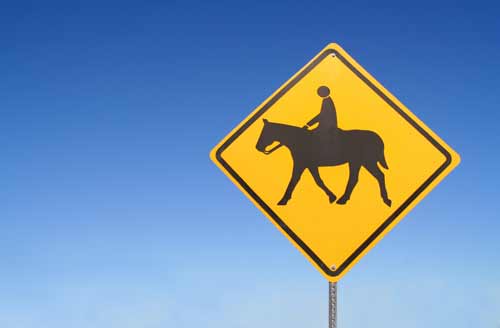 Horse owners on the outskirts of Mount Gambier have brought back “neighbourhood watch” to combat the danger posed by unknown culprits allegedly creeping into private property and setting horses loose on public roads.

Several reported incidents at Compton properties have raised frustration and suspicion, along with fears for public safety, in what residents believe is a spate of blatant ignorance by the perpetrators. Continued nuisance activity could result in someone being seriously hurt or killed – either by a spooked horse or collision between a vehicle and horse, according to Bells Lane resident Naomi Moreland. She told The Border Watch her pony and horse were taken from their paddock less than two weeks ago – via a series of gates to her property – and were almost struck by a passing vehicle. “We live close to the Princes Highway, frequented by trucks and farm machinery, while there are a lot of crests and bends along our road,” Ms Moreland said. “When I picked our horses up from the neighbour who caught them I felt sick thinking about what could have happened to the driver of the car if there had been a collision.” Ms Moreland said she was unnerved that the horses had been led past the house while her family slept. “The morning after they were taken we found hoof marks alongside human footprints – they had to go through three gates, all of which were closed and chained, and long grass to get to the road,” she said. “There is no way Molly, the pony, would walk through the high grass without someone dragging her.” She said the culprits seemed to have targeted various properties without motive and many residents – believing it was most likely an ignorant prank – had become more vigilant and tightened gate security. Ms Moreland said one of her neighbours had a similar experience in the past month, but a school bus driver cut the horses off as they were about to escape through the open gate. Mount Gambier Senior Sergeant Tom Carter said he was aware of a number of incidents where horses had strayed onto roadways in recent months. “It goes without saying that this poses significant risk to road users,” Snr Sgt Carter said. “Police are currently investigating some of these matters where it has been alleged the animals have been let out of paddocks. “However, in the majority of these the cause cannot be determined and it appears the animals have escaped by their own means as opposed to human involvement.” However, Cafpirco Road resident Deb Childs, who found her ponies in another resident’s driveway after discovering they were missing about a month ago, said this was not the first time persons unknown had tampered with her animals. {sidebar id=3}“Late last year, someone looped barbed wire around the ankle of my thoroughbred show horse – I didn’t say anything until I recently found out that others were having trouble,” she told The Border Watch. An Ascot Way resident, who asked to remain anonymous, also said her two horses’ rugs were removed and dumped in broad daylight last Thursday. “All eight straps had been undone and the rugs were just lying in the paddock,” she said. “I was only gone for 45 minutes – I don’t know if they were watching the house, if it was coincidence or if they were planning to steal the rugs. “I have heard other people’s horses had been let out – I recently helped some neighbours recapture theirs – and following that we padlocked our gates.” The resident said it was hard for children to comprehend someone would do something to harm their ponies and her own kids had become jumpy at unusual sounds around the house. “We hope and assume it’s not a person who owns or loves horses doing this,” she said. “However, they either have some knowledge and are comfortable with horses, or just very stupid.” Persons believed to have let animals out of private property onto roads can face a maximum penalty of $750. Anyone with information in relation to such offending has been asked to contact Mount Gambier police on 8735 1020 or Bank SA Crimestoppers on 1800 333 000.