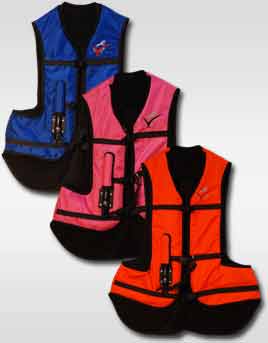 Boxing is commonly recognised as a particularly dangerous sport, with statistics showing 1.3 deaths for every 100,00 participants. However there is a more dangerous sport that our children are participating in every day. Statistics on horse riding show a staggering 128 deaths out of every 100,000 riders.

Horse riding accidents occur not only in the competition arena, but at home as well. Helmets are common place, and often parents insist their children ride in foam body protectors, but now there is a new innovation making horse riding safer. The Point Two Air Jacket is making waves with professional and amateur riders across the world. Essentially an “air bag for horse riders” it deploys in the event of a fall to protect the rider from spinal and internal injuries. The Point Two Air Jacket will be demonstrated at Equitana 2010, the largest Equestrian Expo in the southern hemisphere, held in Melbourne 18-21 November. Australian Olympic silver medallist Clayton Fredericks will be on hand, demonstrating the jacket to riders and parents over the 4 days. He is a firm believer in the benefits of the technology in injury prevention. Earlier this year at the Rolex Kentucky Three Day Event, site of the upcoming World Equestrian Games, leading event rider Oli Townend and his horse suffered the kind of fall that every horse rider dreads. His horse somersaulted over the fence, and landed on top of him in the text book “rotational fall”. In 25% of cases this type of fall results serious injuries or the rider’s death. But, Oli was wearing the Point Two Air Jacket. And while he did not walk away from the fall, he was released from hospital the next day and returned to the venue to watch the last day’s competition. He categorically states that the jacket saved his life. “The Point Two Air Jacket has been proven over and over again to provide increased protection for the rider in the event of a fall”, says Kelvin Fredericks, from Point Two’s Australian distributor, Southern Stars Saddlery. “If you or someone in your family rides, what price can you put on their safety? The Point Two is specifically designed to suit the needs of horse riders, is the fastest inflatable jacket available and is the only jacket to be independently tested, and is now also available in children’s sizes.” The Children’s Jackets are the latest addition to the Point Two range and are designed specifically to suit the lighter weight and more fragile skeleton on small children. In independent testing, the children’s jackets were found to provide 6 times more protection than the traditional foam body protectors currently available, proving without a doubt the benefit to the technology. The jacket is light and comfortable to be worn by any rider, and when mounted a lanyard is attached from the jacket to the saddle. In the event of a fall, the lanyard releases the firing mechanism and in an incredible .1 second the jacket is fully inflated to protect the chest, collar bones, neck, coccyx and internal organs. In fact, independent testing has shown the jackets to increase protection to the spine by 69% when used with a normal foam body protector. {sidebar id=3}Not only popular with riders competing in the sport of eventing, the jackets have been implemented as part of the health and safety measures for the training of cadets in the WA Mounted Police, and the Victorian Mounted Police are currently trialling High- Vis versions of the jackets to be worn on patrols. The Point Two Air Jacket is now available for riders of all levels as well as children, and a jockey specific jacket to be worn in Horse Racing is just around the corner. There will be live demonstrations and fittings of the jacket at the upcoming Equitana 2010, to be held in Melbourne at the showgrounds, 18-21 November.