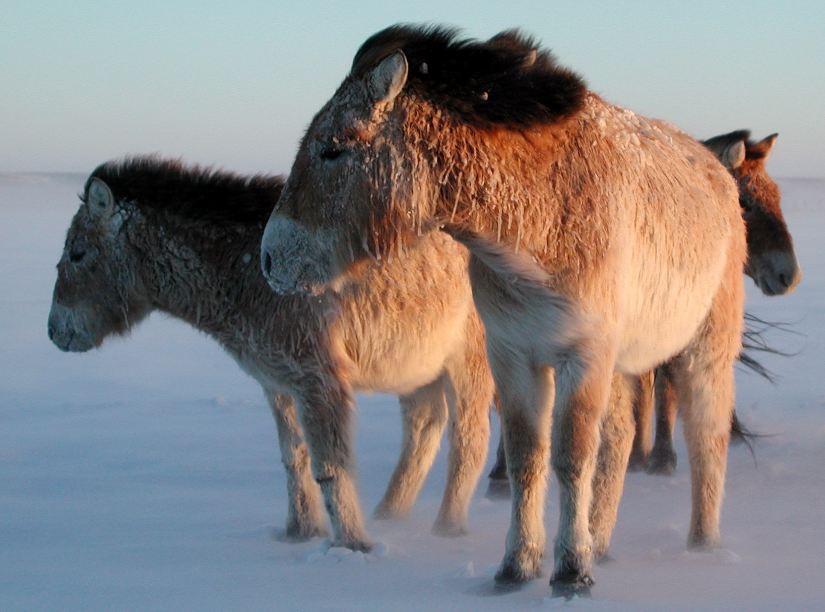 Winters in the Gobi desert are usually long and very cold but the winter of 2009/2010 was particularly severe, a condition Mongolians refer to as “dzud”. Millions of livestock died in Mongolia and the re-introduced wild Przewalski’s horse population crashed dramatically.

Petra Kaczensky and Chris Walzer from the Research Institute of Wildlife Ecology (FIWI) of the University of Veterinary Medicine, Vienna have used spatially explicit loss statistics, ranger survey data and GPS telemetry to provide insights into the effect of a catastrophic climate event on wild horses, wild asses and livestock that share the same habitat but show different patterns of spatial use. Their results are now published online in the international Journal PLoS ONE. In Mongolia, extreme weather conditions – droughts followed by cold and snowy winters – occur at irregular intervals. However, the dzud of 2009/10 was the most extreme winter Mongolia had experienced in the past 50 years. Fifteen out of Mongolia’s twenty-one provinces were declared disaster zones and over 7.8 million livestock, 17% of the national stock, are believed to have perished. Przewalski’s horses have been re-introduced into Mongolia since 1992 and there are now free-ranging populations in Hustai National Park in central Mongolia and in the Great Gobi B Strictly Protected Area (SPA) in south-western Mongolia. Due to its special location at the fringe of the Dzungarian basin, flanked by high mountains, the Great Gobi B SPA received particularly high amounts of snowfall in the winter of 2009/2010. Most snow came with weather from the west and when the snow clouds hit the Altai Mountains on the eastern edge of the Great Gobi B SPA they discharged large amounts of snow, resulting in a strong east-west gradient in snow depth. The high, tightly packed snow made it hard for animals to gain access to the vegetation under the snow. Herders in and around the Great Gobi B Strictly Protected Area were severely affected by the dzud and lost on average 67% of their livestock. Although herders are semi-nomadic, it was hard for them to escape the worst of the weather as competition for the available winter camps was high. Przewalski’s horses were found to use three different winter ranges, two in the east and one in the west. Losses averaged 60% but mainly affected the groups wintering in the east, with the group in the west suffering almost no mortalities. As spatial use of Przewalski’s horses is extremely conservative, groups did not attempt to venture beyond their known home ranges. In contrast, Asiatic wild asses seem to have suffered few losses. These animals roam over much larger areas than Przewalski’s horses and are not restricted to any particular wintering areas.

Petra Kaczensky, the first author on the PLoS paper, says that “wild asses were obviously able to outrun the worst of the dzud by moving west. The long-distance movements and shifts in range highlight how important it is to manage migratory or nomadic species on a landscape level, including multi-use areas outside of protected areas.

Fragmentation of their range will reduce their flexibility and can easily result in local population crashes such as the one seen for the Przewalski’s horses.” The severe effect of this localized catastrophic event was largely due to the small size and limited range of the present-day Przewalski’s horse population. A large and continuous population would be much more robust as it could counteract local population lows or extinctions via re-colonization. The dzud winter of 2009/2010 is a textbook example of how vulnerable small and spatially confined populations are in an environment prone to fluctuations and catastrophes. Losses of this magnitude are difficult to model or predict. As long as populations remain small and spatially confined, their survival cannot be guaranteed, necessitating a long term conservation commitment to ensure the species’ future. "The winter disaster really highlighted how dangerous it is to have all our eggs in one basket or in this case all the horses on a single pasture,” says Petra Kaczensky. “The national strategy for Przewalski’s horse conservation in Mongolia should continue to aim at multiple re- introduction sites with spatially dispersed populations. Ideally the sites should cooperate closely and if necessary also exchange animals on a national as well as international scale. Such steps have already been initiated in Mongolia and the recent downlisting of the Przewalski's horse in the IUCN Red List from ‘critically endangered’ to ‘endangered’ shows that this strategy is paying off." Generally, it is not feasible, either technically or financially, to breed and re-introduce all endangered species, as has been done for the Przewalski´s horse. Chris Walzer explains, “More promising strategies involve timely science-based measures to reduce threats to fauna and flora. These may include the establishment of protected areas but it is also important to maintain natural spaces and structures that make multi-purpose landscapes ‘permeable’ for wildlife, so that wide-ranging species can roam, as Asiatic wild asses tend to do”. source: University of Veterinary Medicine Vienna