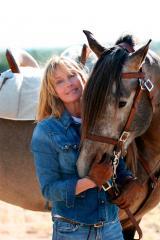 American actress Bo Derek has lent her support to the FEI Awards 2012 by calling on the worldwide equestrian community to make nominations.

Derek, who shot to superstar status through her role in the 1979 romantic comedy film 10, is a devoted horse enthusiast. She underlined the importance she attaches to horses in the title of her 2002 autobiography Riding Lessons: Everything That Matters in Life I learned from Horses. Derek owns Andalusian and Lusitano horses and is an ambassador for Equine Advocates, a non-profit horse protection organisation. She is a great fan of horse sport and cites USA Dressage rider Tina Konyot as one of her heroes. "Knowing the grit and determination that equestrian athletes need to succeed and the unconditional love of horses that drives those people who work behind the scenes, I am only too happy to lend my support to the FEI Awards 2012," Derek said. "These global awards are an opportunity to let the people you admire step forward and enjoy a well-deserved moment in the spotlight. Making a successful nomination is a great way of saying thank you to consistently great performers." Nominations for the FEI Awards are open until 31 July at www.feiawards.org