A Fine Time At State Polocrosse 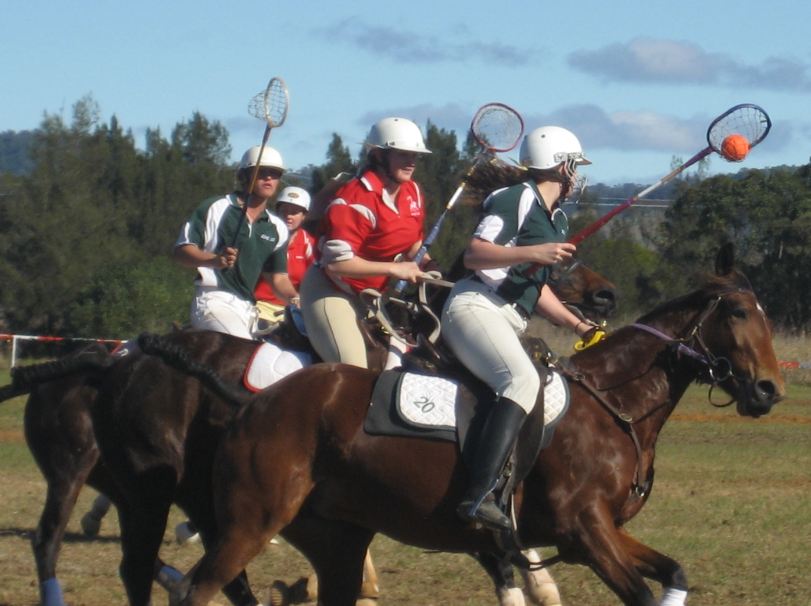 Wet weather threatened the start of the 2012 Bombers Australia State Polocrosse Championships. However much to the delight of competitors and officials, each day of the event saw unprecedented warm weather for this winter championship. The event hosted by Zone 19, began with a fitness check on Thursday, July 12th, with team 7, the Advanced Under 17 team from Zone 19 awarded the best presented team of the carnival before entering the round-robin part of the competition on the Friday and Saturday. The finals were held on the Sunday with team 5 from Zone 26 defeating team 1 from Zone 19 to take out first place in the Under 13’s age group. Team 4 from Zone 23 defeated team 3 from Zone 19, five points to four. Team 6, Zone 16 Canberra Riding Club defended their hard won 2011 titles to also take out the 2012 Championship in the Under 17 age division with eight points to six in the final game defeating team 9 from Zone 26. Team 7 from Zone 19 placed third six points to five over team 8 from Zone 20. In the Under 25 age group, team 18 from Zone 20 also the 2011 champions took out the title from team 15, from Zone 16 seventeen points to zero. Team 16, from Zone 16 placed third defeating team 19 from Zone 26, ten points to eight. Each of the rider’s age champion teams received a new Polocrosse Racquet courtesy of naming rights sponsor Bombers Australia. Three riders were also awarded the best and fairest in their respective age groups. Ebony Ramm from Woodlands Park Pony Club, Zone 26 was awarded the prize in the Under 13 age group. In the Under 17 age group, Mark McInnes from Canberra Riding Club, Zone 16 received the award. While in the Under 25 age group Clayton Dodwell from Tumburumba Pony Club, Zone 20 was pleased to win the award. Each winner was presented with a rug courtesy of sponsors Camelot rugs. Mark McInnes “was thrilled to win the best and fairest in the Under 17’s”. “The zone put on a terrific competition,” said Mr McInnes. Ebony Ramm, Under 13 age group winner of the Best and Fairest award also had a great weekend. “Thank you to Zone 19 for having us. To the other teams we played. To the officials for picking me for best and fairest player U13’s. To all the sponsors, and a big thank you to Stan Bowd for coaching us. I have had heaps of fun, can’t wait till next year.” The next Pony Club NSW State events are the Bungendore Community Bank State Mounted Games Championship which is to be held at Bungendore Showgrounds, Bungendore from the 29-30th September 2012 and the Ranvet State One Day Event Championship which is to be held at Albury Wodonga Equestrian Centre, Thurgoona from the 6-7th October 2012. The Pony Club NSW State Polocrosse Championships are supported by Naming Rights sponsors Bombers Australia, Sport and Recreation a division of Communities NSW, Mitavite official feed partner, Peel Pastoral Company, Code Construction, Premier Auto Centre, Camelot Horse Rugs, International Animal Health, Horseland Narellan, Tuff Rock as well as other local sponsors. To find a Pony Club near you visit the PC NSW state website.