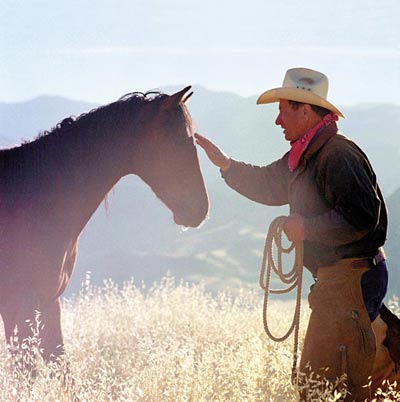 The Monty Roberts technique produces favourable results for initial training of riding horses compared to a conventional training method, according to recent research.

The study, by Drs Veronica Fowler, Mark Kennedy and David Marlin, was conducted at Hartpury College in England. It was presented to the International Society of Equitation Science conference in The Netherlands October 2011, and has been accepted for publication in the journal Anthrozoös. Fourteen untrained horses, between 3 and 5 years old, were selected for the study. They were matched according to temperament, and then assigned randomly into two groups for initial training by either Monty Roberts or Phil Roelich, who was experienced in conventional (English) training methods.Stable mirrors reduce weaving Each trainer was allowed 30 minutes daily with each horse during a training period of 20 days. After that, the horses undertook a standardised ridden obstacle and flatwork test and a ridden freestyle test. The horses' performance was assessed by a panel of judges who were unaware of the nature of the study or the identity of the trainers. Heart rate was recorded throughout training and assessment. The researchers found that, compared to the conventionally trained horses, the Monty Roberts trained group had lower maximal heart rate when first saddled and first ridden. Dr Fowler commented : “Our study could find no evidence that the use of the round pen or, indeed the technique of Join-up, was fear inducing and thus a significant stressor to the horse based on heart rate alone.” The two groups had similar mean heart rates during both the ridden flatwork test and the ridden obstacle test. However, the Monty Roberts trained horses received significantly higher performance scores from the judges. The researchers conclude that the use of Monty Roberts horsemanship methods before and during putting a saddle and a rider on a horses back for the first time, results in lower heart rates in horses when compared to using conventional (English) methods. In addition, horses trained for 20 days using Monty Roberts method perform significantly better in ridden tests than horses trained conventionally. For more details see:
A comparison between the Monty Roberts technique and a conventional UK technique for initial training of riding horses
Fowler, V.L., Kennedy, M. and Marlin, D
Equitation science: principles and practices – science at work . Proceedings of the International Society of Equitation Science(2011) p52
http://www.equitationscience.com/documents/Proceedings/Netherlands2011_Proceedings.pdf
Reprinted with permission of Equine Science Update.