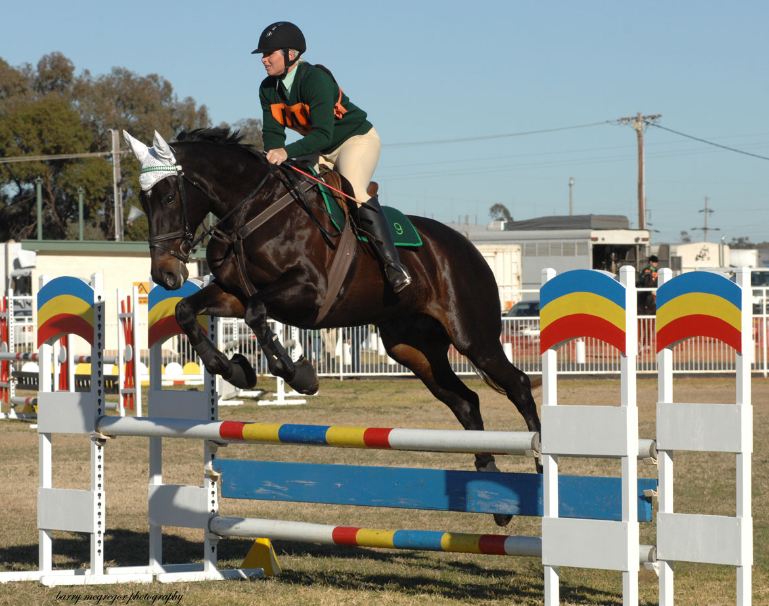 Local Pony Club Zone 4 is to be commended for their superb display of hospitality and facilities at the 2012 Ranvet State Showjumping Championships held at Nyngan Showgrounds from the 7-8th July.

Around 130 competitors travelled from all around the state for this weekend event with a small contingent of interstate competitors also making the trek from Queensland and Victoria. Competitors arrived at Nyngan on Friday to participate in the fitness check in preparation for the championship. During the fitness check parade local Zone 4 riders wore black armbands in memory of Peter Dutton who passed away in January aged 84. Peter was a former chief instructor and life member of the Pony Club Association of NSW, and was also Chief Instructor of Zone 4 for forty four years. The main “Peter Dutton Arena” was recently named in his honour. Peter had a long association with pony club at all levels and was particularly keen on showjumping. He would have enjoyed seeing the many talented young riders from across the state taking part in the event. After the fitness check, Nyngan Pony Club displayed their warm hospitality with a welcome barbecue for the competitors. Most riders and their families then camped at the venue for the period of the championship. The event kicked off on Saturday morning, with tough competition in all four age groups. Nyngan Pony Club proceeded to host a two-course dinner in the Walker Pavilion on the Saturday night, a social highlight of the weekend for many competitors. The championship concluded Sunday lunchtime, with a presentation ceremony Sunday afternoon. In the Under 13 age group, Laura Mary Harland, riding horse Redrock Pippa from West Wylong Pony Club was the age champion in her division. Stephanie Judd also from West Wyalong Pony Club on her horse Star Observer claimed the 13 and Under 15 years’ title. Local Nyngan Pony Club rider, Pippa Manton won three out of four rounds to take out the 15 and Under 17 division on her horse Gotchya. Ryan Towns from Gravesend Pony Club, riding Noble Eros, was the 17 and Under 25 age champion. All of the age champions took home prizes from major naming rights sponsor Ranvet. Local Zone 4 was the winning Zone, with NSW the overall winning State. Riders were also judged on their presentation during the fitness check with Zone 11 winning for a second successive year. The next Pony Club NSW State event is the Bungendore Community Bank State Mounted Games Championships which is to be held at Bungendore Showgrounds, Bungendore, from the 29-30th September 2012. The Pony Club NSW State Showjumping Championships are supported by Naming Rights sponsors Ranvet, Sport and Recreation a division of Communities NSW, Mitavite official feed partner, as well as other local sponsors. To find a Pony Club near you visit the PC NSW state website.