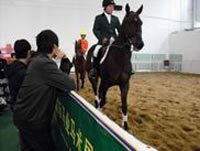 The organiser of the China Horse Fair 2012 (CHF 2012) has just been notified by the Beijing Public Security Bureau that due to the staging of the 18th National Congress of the Communist Party of China, the Bureau is unable to approve any events due to take place in Beijing during this period. Regrettably the organiser has been left with no alternative but to now reschedule the CHF 2012 to take place 18 – 20 November 2012 at the same venue (New China International Exhibition Center).

Despite this late change, CHF 2012 has had a lot of interest and the stands have already been fully booked. Alongside many previous international exhibitors, a lot of suppliers who were not present last year, have secured a place at CHF 2012. It has successfully attracted world leading suppliers from Argentina, USA, UK, Germany, France, the Netherlands, Ireland, Belgium, Switzerland, Denmark, Hungary, Australia, Japan and of course China to participate. With industry associations such as KWPN (the Netherlands), USLGE (US), and UNIC (France) are once again participating at CHF, other well-known associations such as BWT (Belgium), BETA (UK), AAFE (Argentina), and Equestrian Globe (Germany) have also confirmed their stands at CHF 2012. Importantly, these associations will be coordinating the participation of new to market suppliers who are keen to promote their products for the first time in China at the CHF 2012. The marketing team of CHF 2012 is immediately undertaking an additional visitor promotion campaign to advise the many professional buyers planning to attend the event, of the new dates and the team is very confident that there will be no negative impact on attendance as a result. Marketing Manager Sonia OuYang said: “There will be few competing equestrian activities in November other than CHF 2012, so we are very confident that the professional buyers from across China and the region will continue to support this year’s event. The new dates include a weekend and a Monday which is a day holiday for many riding club personnel, which will be more convenient for both amateurs and industry professionals to visit the show.” HorseYard.com.au is proud to be a media partner of the China Horse Fair for 2012. Visit the China Horse Fair for more information.