Team Black Sheep Stand Out From The Flock 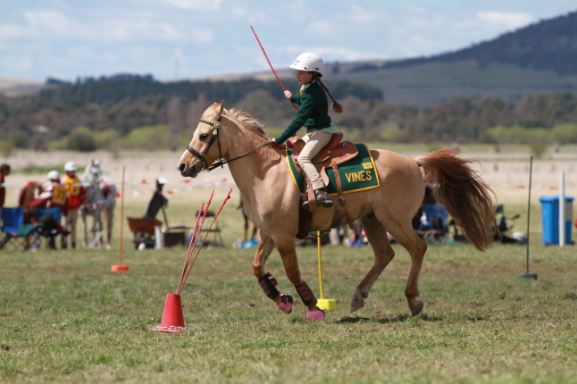 Twenty eight teams with 140 competitors travelled from all over NSW for the Bungendore Community Bank State Mounted Games Championship over the weekend of the 29-30th September at Bungendore Showgrounds, Bungendore.

With plenty of games included in the program such as the Milk the Cow Race and the Sword Race, competitors enjoyed a great weekend filled with fun competition. Local host Zone 16 dominated the leader board, with eleven teams entered into the competition. In the 17 to under 25 age division, Team Black Sheep from Zone 16 stood out from the flock with an almost perfect overall score of 97 out of a possible 100 points. Team Blue from Zone 26 came in second place with 66 points. While Zone 16 Team Extreme scored 57 points to place third overall. In the under 17 year’s age group, Zone 16 Team Wamboin Warriors took at first place with 86 points. The Beauty and the Beasts from Zone 26 came in a close second with 82 points. In third place, the Gearys Gap Gallopers from Zone 16 scored 68 points. Team Black Sheep consisted of Katie Slater from Wamboin Pony Club, Zac Hope, Frances Barnard, Georgia Hope from Canberra Riding Club and Aleira Plath from Michelago Pony Club. According to Bronwyn Barnard proud parent of winning team member Frances Barnard, “It was a very friendly competition with lots of good natured heckling and banter amongst the older riders.” “Frances is very happy to be a state Mounted Games Champion and to get the opportunity to ride with the other members in her team,” said Mrs Barnard. Event organisers would like to thank Naming Rights sponsor, Bungendore Community Bank for their generous support of this event. The next state event is the Virbac Animal Health State Show Riding Championships which is to be held at Bi-Centennial Park, Camden from the 1-2nd December 2012. The Pony Club NSW State Mounted Games Championships are supported by Naming Rights sponsors Bungendore Community Bank, Sport and Recreation a division of Communities NSW, Mitavite official feed partner, as well as other local sponsors. To find a Pony Club near you visit the PC NSW state website.