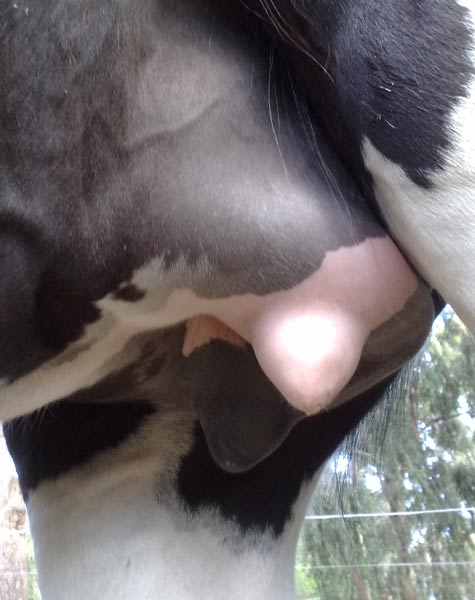 Colostrum or "first milk" is the thick, yellow secretion from the mammary gland, present immediately after birth. Produced in the mare's udder during the last two to four weeks of gestation in response to hormonal changes, colostrum contains concentrated immunoglobulin (antibodies) from the mare's serum. Colostrum and its protective antibodies are present in the mare's milk for only the first day after foaling; these maternal antibodies are necessary to protect the foal against infectious diseases. For various reasons, breeders may need or opt to collect colostrum.

The best quality colostrum is produced in the first eight hours post-foaling. Ideally, the foal will receive at least two pints of mare's milk within the first 12 hours of its life. But sometimes a foal may not receive the colostrum it needs: - The foal is too weak to stand and nurse unassisted. In that case, colostrum may need to be milked from the mare and fed via tube to the foal.
- The baby may be capable of nursing, but does not receive sufficient amounts of colostrum because the mare had premature lactation. That is, she leaked "first milk" and colostrum before the foal was born; by the time of foal delivery, all the colostrum was gone.
- Testing of the colostrum revealed an inadequate immunoglobulin content. There are other reasons to collect colostrum, as well. If a mare is at risk of dying, colostrum should be collected from her before she dies. Additionally, one may opt to collect colostrum for storage in a colostrum bank as "insurance" for mares that deliver a foal without having colostrum. Many large breeding farms collect and store colostrum for just these reasons. One gathers colostrum by milking the secretion from the teats. Says Fairfield T. Bain, DVM, Diplomate in the American College of Veterinary Internal Medicine, American College of Veterinary Pathologists, and American College of Veterinary Emergency and Critical Care, and Staff Internist/Director of Clinical Laboratory at Hagyard-Davidson-McGee, "This is an easy procedure that takes only a few minutes and can be done by anyone. Grasp the teat between the thumb and forefingers and gently squeeze and force the milk downward within the teat canal (the cavity inside the teat). No special equipment is required other than clean hands and a clean container to collect the colostrum into. Clean, plastic, screw top containers are preferred as a screw top container is easiest to open when frozen." After the colostrum is collected, it can be stored in any freezer for up to a year when frozen at -4 degrees Fahrenheit (-20 degrees Celsius). "Frozen immunoglobins are stable for much longer than that but the overall quality of the colostrum deteriorates over time," Dr. Bain says. "Just prior to using, thaw stored colostrum at room temperature. Do not thaw by microwave as essential antibodies can be destroyed. "Because colostrum is generally only available for the first 12-24 hours after a mare foals, it's crucial to work within that time frame. After that, normal milk production takes over and the amount of immunoglobulin is diluted by the normal milk secretion. It is preferable to collect colostrum shortly after the healthy foal has nursed the mare for the first time because over time the concentration of immunoglobulins will be diluted by increasing milk production. At that time, approximately one pint can safely be obtained from the mare without risking any colostrum deficiency to the foal. Eight to ten ounces of colostrum should only be collected one time from each mare per delivery so as not to deprive the foal." It should be noted that if colostrum is stored in a colostrum bank where it potentially will be administered to foals from other mares, it is preferable (actually essential) to have the colostrum tested prior to freezing for the presence of specific antibodies to equine red blood cell types Aa and Qa. Dr. Bain explains: "These are the most common blood types that result in colostrum cross-match abnormalities known as neonatal isoerythrolysis where the anti-Aa or anti-Qa antibodies in the colostrum bind to those specific blood types on the foal's red blood cells, thus causing the removal of these antibody-coated red blood cells from the foal's blood circulation and resulting in anemia and jaundice (yellow discoloration). This occurs if the foal has inherited these blood types from the stallion or mare (in the case of receiving colostrum from an alternate mare).Testing can be done by several veterinary laboratories around the country at some of the larger referral practices and in the veterinary schools." Gathering and storing colostrum is not a difficult procedure nor, if done correctly, does it deprive the foal of important first milk.