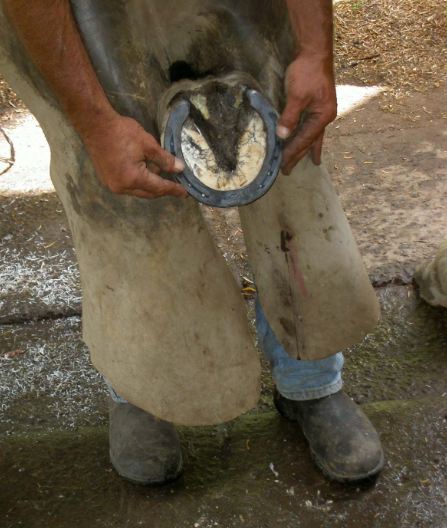 The art of shoeing a horse will not be a lost tradition at The University of Queensland with the Gatton campus poised to set-up a new workshop in the farrier skill.

UQ's Veterinary Medical Centre received more than $6000 worth in farriery equipment thanks to Australian horse industry product developer, Mustad Australia. UQ Gatton Farriery Instructor Craig Jones said he was excited about the opportunities the donated equipment would provide for the farrier program. “It's a fantastic donation and will help with our training for both the veterinary and farrier students,” Mr Jones said. “It will allow a lot of interaction between the vets and the farriers as it is important that we have a close working relationship.” Mustad Australia donated a gas forge, anvil and farriery hand tools. “To have a fully equipped workshop at the Equine Hospital in the Veterinary Medical Centre will also mean that visiting clinicians can use the facility and we can run more training programs,” Mr Jones said. The University of Queensland Gatton Vocational Education Centre has 15 farriers undertaking a four-year apprenticeship, involving four days a week of on the job training and one day of technical training on the Gatton Campus. Mustad Australia also visited UQ Gatton as part of their 2012 Lecture Series with a series of talks on the anatomical and diagnostic review of the front and hind limb. Mustad Australia is a market leader in hoofcare, offering a wide range of horseshoes, hoof nails, tools and rasps, including brand names such as O'Dwyer Horseshoes, New Zealand Concave, St Croix Forges, Mustad, Derby, Aussie nails and Heller rasps. The UQ's farrier program is the only accredited farrier program in Queensland. For more information on the farriery apprenticeship visit www.uq.edu.au/gatton/gvec.