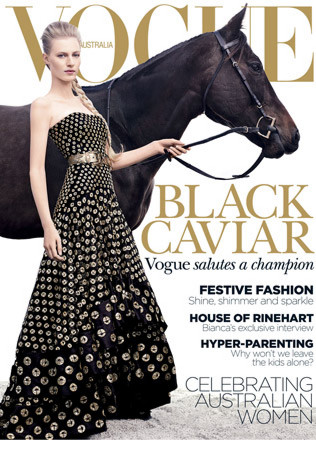 For the first time in its 53-year history, Vogue Australia has featured a horse on its cover.

Vogue’s cover girls have included Oscar-winning actors, supermodels and princesses, but there has never been so much interest in a cover before. It has been impossible to keep secret and Vogue has had to bring the on-sale date forward because the leaks just couldn’t be contained any more. Vogue will now go on sale this coming Friday, November 2, on the eve of Derby Day. Black Caviar (known at home as “Nelly”) was photographed by young Australian photographer Benny Horne in the foothills of the Dandenongs in a purpose-built outdoor studio alongside the thoroughbred of Australian modelling, Julia Nobis. For the recent Paris fashion week, Julia appeared in 23 catwalk shows, just one more than the 22 races Black Caviar has won. On the cover Julia wears a bespoke Alexander McQueen gown, which is so valuable it is captioned “price on application”. Inside, Vogue features the women of Black Caviar’s syndicate in designer gear. In the shoot inside, which features portraits of Nelly and her all-powerful hindquarters, Julia wears black and white eveningwear. Journalist Larry Writer interviewed trainer Peter Moody and the syndicate owners about Nelly, her career and her future. Jill Taylor, one syndicate member, says of the fateful day at Black Caviar raced at Ascot: “To me Black Caviar was unbeatable; losing at Ascot was unthinkable. That’s not arrogance. She wins.” Ascot was a closer race than expected but, says Jill, “she’s a champion and champions find a way to win”. Jill adds: “She’s ours on paper but she’s Australia’s horse.” Jannene Madden, another syndicate member, says: “Nelly knows we love her, how could she not? She gets it. She’s given us a fabulous ride.” Vogue says fans barrack for her as they do their football team, an Olympic athlete or rock band. In her editor’s letter in the magazine, Vogue editor-in-chief Edwina McCann says: “Black Caviar certainly knows when the lens is focused on her, and it’s terrific to celebrate her beauty, rather than just her speed.” Source: Vogue Australia.