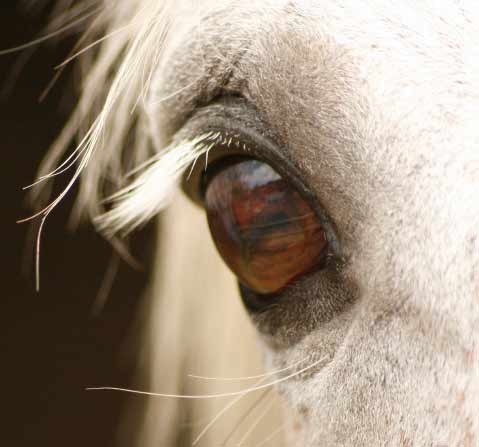 Headshaking syndrome is when a horse shakes or jerks its head uncontrollably for no apparent reason. There are striking clinical similarities between facial pain syndromes in people, most notably trigeminal neuralgia, and headshaking in horses. Although some progress has been made towards both diagnosing and treating the condition in horses, the pathology of the disease remains unknown and further research is needed.

A recent study led by academics from the University of Bristol’s School of Veterinary Sciences and the University of Liverpool, evaluated the long-term success rate of a pioneering new surgical procedure, called caudal compression of the infraorbital nerve, where platinum coils are placed into the nerve ends within the canal to relieve the pain. The study found this surgery could be a viable option for headshaking in horses with a long-term success rate of nearly 50 per cent. Nonetheless, researchers are continually working to find a more effective treatment method for headshaking. Veronica Roberts, Clinical Fellow in Equine Medicine in the University’s School of Veterinary Sciences, who led the study, has received a grant from the British Neuropathological Society to investigate possible focal demyelination of the nerve as a cause of headshaking in horses. The reason the Bristol research team is looking for demyelination is that it is the most common cause of trigeminal neuralgia in people. The team will collaborate with Seth Love, Professor of Neuropathology in the School of Clinical Sciences, as he has carried out work in this area in people. To find a more effective treatment and to understand the disease, Veronica is requesting that anyone who is considering euthanizing a horse due to headshaking to contact her for possible inclusion in her study. The study published in Equine Veterinary Journal evaluated the long-term success rate of caudal compression of the infraorbital nerve, the researchers reviewed clinical records of 58 horses that underwent this surgery between June 2004 and January 2011. The horses, aged one to 17 years, were used for general riding, show jumping, eventing, or dressage and had a history of headshaking. The study found:
- Surgery was initially considered a success in 35 of 57 (63 per cent) horses, but headshaking recurred between nine and 30 months later in nine horses;
- The research team repeated the surgery in ten horses;
- The overall success rate at an average follow-up time of 18 months, considering only the response to the - last surgery performed, was 49 per cent;
- Owners reported nose rubbing in 30 horses at long-term follow-up after surgery;
Nose rubbing resolved in all but four horses that were later euthanized. Veronica Roberts said: “There are striking clinical similarities between facial pain syndromes in people, most notably trigeminal neuralgia, and headshaking in horses. “Headshaking in horses is a major welfare issue for horses and more research is needed on the aetiopathogenesis of this pain syndrome to improve medical and surgical therapies. Headshaking is a significant cause of distress for some horses and this treatment in selected cases is needed even though the failure rate is limited.” The researchers concluded from their study that the caudal compression procedure offers the best prognosis for a successful outcome compared with other treatments for horses where the only alternative is euthanasia. However, surgical treatment of the disorder needs to be improved together with further research into the pathogenesis of the disorder. Paper: Caudal anaesthesia of the infraorbital nerve for diagnosis of idiopathic headshaking and caudal compression of the infraorbital nerve for its treatment, in 58 horses, V. L. H. Roberts, J. D. Perkins, E. Skärlina, D. A. Gorvy, W. H. Tremaine, A. Williams, S. A. McKane, I. White and D. C. Knottenbelt, Equine Veterinary Journal, September 2012, Volume 44, Issue 5.