UC Davis To Test Experimental Drug For Laminitis In Horses 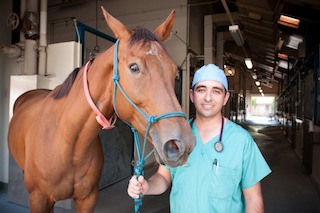 Veterinarians at the University of California, Davis, School of Veterinary Medicine have announced plans to conduct the first clinical trial of an experimental drug that has shown promise in treating horses stricken with laminitis, an excruciatingly painful and often life-threatening foot-related disease.

Four horses suffering from laminitis have been treated with the investigational anti-inflammatory drug so far. One experienced a complete remission that has lasted for more than a year, and three others have shown some improvement. A paper on the first laminitis case has been accepted for publication by the peer-reviewed Journal of Veterinary Anaesthesia and Analgesia. The paper is expected to be published in the journal’s February issue, but journal editors authorized the authors to disclose their findings ahead of publication. “This is an unusual step for us to announce this so far in advance, but because euthanasia is often the only way to alleviate pain in severe laminitis, we felt that it was important to let the veterinarians and horse owners know that this compound has shown potential as a treatment,” said Alonso Guedes, an assistant professor in the School of Veterinary Medicine. The horses were treated under a “compassionate use” protocol approved by the UC Davis Institutional Animal Care and Use Committee. That protocol allows animals to be treated with an experimental drug if no approved alternative treatment exists. A clinical trial to assess the drug’s safety and establish a tolerable dose for the compound is expected to begin in the spring. Further clinical trials would be needed to establish the drug’s effectiveness as a laminitis treatment. The experimental compound, known as t-TUCB, belongs to a group of anti-inflammatory compounds called sEH (soluble epoxide hydrolases) inhibitors. It stems from a discovery made more than 40 years ago by UC Davis entomology professor Bruce Hammock while doing basic insect biology research. Originally interested in finding biological insect control methods, Hammock has since broadened his research to also search for biomedical applications. He and colleagues have identified a group of anti-inflammatory compounds, including the sEH inhibitors, that have proven to be effective in relieving inflammatory discomfort and pain related to nervous system disorders in mice and rats. Their work has been published in scientific journals including the Proceedings of the National Academy of Sciences and the Journal of Medicinal Chemistry. Laminitis is a poorly understood condition involving inflammation of a horse’s nailbed — the connective tissue where the horse’s hoof and lower foot bone join. The inflammation is usually accompanied by swelling, a restriction of the blood supply to that area, high blood pressure, lameness and extreme pain. Guedes noted that the safe management of laminitis-related pain is one of the biggest challenges for equine veterinarians. Often, euthanasia is the only humane alternative for alleviating pain and suffering in horses afflicted with the condition. Consequently, the survival rate for laminitis is estimated to be only 25 percent. Very few surviving horses return to their previous levels of activity, and laminitis often reappears. In his upcoming paper, Guedes reports the case of a 4-year old Thoroughbred mare named Hulahalla that developed laminitis. The horse had been retired from racing following a tendon injury and donated to the UC Davis School of Veterinary Medicine, where it was participating in a study focused on healing tendon injuries using stem cell treatments. Veterinarians from UC Davis’ William R. Pritchard Veterinary Medical Teaching Hospital treated the laminitis with conventional therapies including cold immersion, antibiotics, leg wraps, and two commonly used nonsteroidal drugs intended to reduce inflammation and relieve pain — but the horse only got worse. At the point that the mare was spending most of the day lying down, Guedes got involved. Before resorting to euthanasia, Guedes and the veterinary team decided to try one last treatment, t-TUCB. The veterinarians administered the experimental compound intravenously early on the eighth day of Hulahalla’s illness. After receiving the first dose, the horse remained standing in the stall most of the day, became interested in her surroundings and walked voluntarily. The mare’s demeanor, posture and mobility continued to improve over four days of treatment, and her high blood pressure gradually returned to normal. No adverse affects from t-TUCB were observed, and Hulahalla has remained laminitis-free for a full year. The sEH inhibitors, including t-TUCB, are currently available from the Hammock lab, which has provided the experimental compounds to more than 100 academic scientists around the world for basic investigation into their role in treating disease. Hammock said that work aimed at moving t-TUCB and related compounds toward clinical use is advancing in several areas. He and Guedes are working on compounds with potential for targeting pain and arthritis in companion animals. And they are working with UC Davis to move the intellectual property from this research into a company to develop medications for difficult-to-manage neuropathic pain associated with diabetes and nerve injury. Funding was provided by the National Institute of Environmental Health Sciences and the UC Davis Center for Equine Health. Video: Insect compound helps hoof disease. Video (2 min ). Videography by Ken Zukin and Kristen Simoes