Benefits Of Feeding Fat To Horses 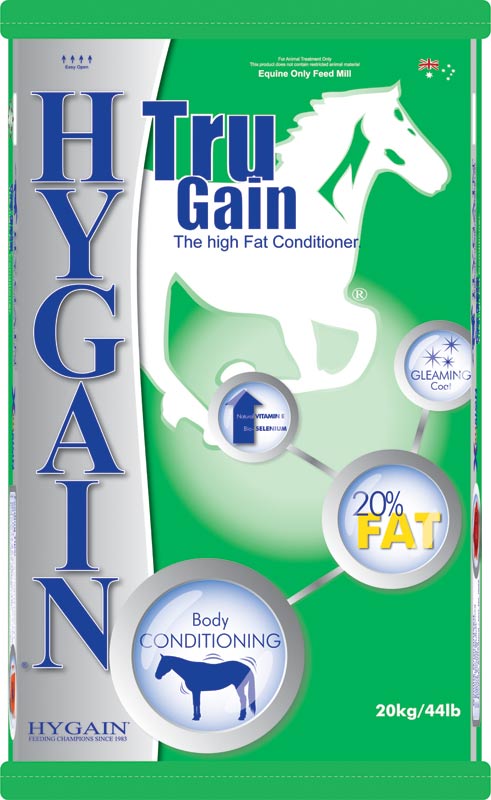 Enhancing horse productivity and wellbeing has drawn considerable interest in feeding fat supplemented diets to horses. Much of this interest has been prompted by a significant amount of research on the subject over the last ten years. Whilst several unknown aspects of specific fatty acid nutrition in the horse still exist, the caloric and some extra caloric effects of feeding fat to horses are well documented.

Safe Calorie Source For Weight Gain
Vegetable oil such as rice bran oil contains approximately 2.5 times more digestible energy than an equal weight of oats and 2-3 times as much digestible energy as an equal weight of cracked corn. Importantly this energy is almost exclusively digested in the small intestine. Horses can digest large amounts of oil, up to 20% of the total diet. Feeding rice bran oil supplemented feeds such as HYGAIN TRU GAIN®? is a safe and effective method to put extra calories in the horse’s diet. The increased calorie content of HYGAIN TRU GAIN®? can boost body condition in thin horses, diminish excitability, increase oxidative capacity in performance horses and act as a carrier for fat-soluble vitamins. Adding fat to the diet may also decrease the amount of grain in the horse’s diet, providing a safer method of supplying calories. Reducing levels of starch intake may decrease the risk of feed related disorders such as colic, laminitis, acidosis, equine metabolic syndrome and cushings. Fat in the Breeding industry
Energy balance and body fat are major factors in reproductive performance in mares. The addition of dietary fat can help mares maintain energy balance and body fat reserves especially when feed intake is limited during late pregnancy. HYGAIN TRU GAIN® is also useful with lactating mares to ensure these mares have enough energy for adequate milk production. Research showed that when lactating broodmares were fed fat supplemented diets, the concentration of fat in milk increased, and their foals grew faster compared to their counterparts which were fed conventional, low fat diets. Effects on Performance/Race Horses
Undoubtedly, the most dramatic effects of feeding fat supplemented diets to horses have occurred in the equine athlete. Horses that are adapted to dietary fat have an increased oxidative capacity and spare muscle and liver glycogen during aerobic exercise. Studies have shown that fat is a major source of energy when exercise is below 75% of maximum aerobic capacity (VO2Max). This means a large group of performance horses including endurance horses and many types of show horses can utilize a large amount of dietary fat. Additionally, supplementing fat to the diet of any equine athlete will result in metabolic advantages such as reduced feed requirements for a comparable amount of work, reduced heat production, reduced thermal load and maintenance requirements for thermal regulation and increased energy available for work. Also, production of power and stamina can be increased for several seconds in the horse performing short-term, high-velocity exercise by an appropriate adaptation to a fat supplemented diet. It has been shown that race horses can run faster at a constant heart rate and cutting horses can stop and turn harder for a longer duration after appropriate adaptation to correctly formulated fat supplemented diets. Some of these effects are due to the caloric benefits described earlier, but the primary effect is due to the improvement in glycogen storage and mobilization that results from feeding a fat supplement. It appears that the initial onset of acute fatigue in the performance horse is the depletion of glycogen stores in the liver and muscle. Thus, feeding an appropriately balanced fat supplement, such as HYGAIN TRU GAIN® along with a correctly designed training protocol may offer great promise as a way to improve performances and perhaps reduce the frequency of injuries to elite equine athletes. Tying-up syndrome
High grain diets are a potential problem for horses with two forms of exertional rhabdomyolysis. Unfit horses with polysaccharide storage myopathy (PSSM) benefit from daily exercise, removal of grain, and the addition of fat to provide the necessary calorie intake. Fit horses with recurrent exertional rhabdomyolysis (RER) can maintain high calorie intake if the amount of grain in the diet is reduced and the amount of fat in the diet is significantly increased. In both of these forms of tying-up, dietary fat helps to minimize symptoms. Recent research has shown that many such horses improve markedly on a diet in which 20 to 25 percent of their energy needs are provided by fat. Sales Preparation and Show horses
A sleek, shiny hair coat is necessary for both show and sale horses. A quality hair coat is partially dependent on providing horses with essential fatty acids for healthy skin and hair. Supplementing the diet with HYGAIN TRU GAIN®? is a reliable practice to deliver essential fatty acids to improve hair and skin condition. Is Fat Safe To Feed?
Fat should be gradually introduced into a horses’ diet over a 14 day adaptation period. If horses are not properly adapted to fat and too much is fed, the horse may refuse the feed or if the feed is consumed a transient diarrhoea may result. Unlike grain, over supplementation of dietary fat does not result in colic or laminitis. Visit Hygain See more horse feeding and nutrition articles in The Feed Room